Two test matches down, and two to go, and twice India have capitulated so far in this series… they lost the unlosable in Adelaide, and fell apart on the fourth day in Brisbane, and turned a certain five-day game there into a four-day affair, as Australia were left with a small target to chase, to take a 2-0 lead, with two to play.

Today, attention turns to Melbourne, as Australia go about winning the series, and India look to restore credibility, and claw their way back to draw this series, as that’s the only way they could possibly retain the Border-Gavaskar Trophy!

It’s one of the great traditions in Australian Sport… It’s Boxing Day! It’s the MCG, and Bill Lawry is here too.

Hello everyone, I’m Zak Caban. Merry Christmas and Happy Boxing Day to you. Welcome to the Melbourne Cricket Ground for the Boxing Day Test Match between Australia and India.

Steve Smith’s men were brilliant in Brisbane, with the exception of a few hiccups in the chase of 128.

The Indian camp are a bit unsettled, but they MUST bounce back here… they’ve got the team, and the ability to beat Australia, but as I said at the top, they’ve capitulated twice, and lost one test that they certainly shouldn’t have.

Massive crowd building… the news here is that Australia have WON the toss, and will BAT first.

Here’s a look at the two teams for you… make note of Joe Burns, the Australian debutant for Boxing Day.

More from the MCG in just a moment! 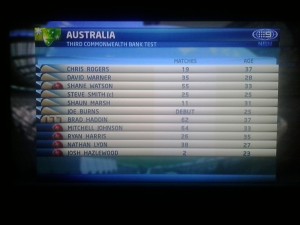 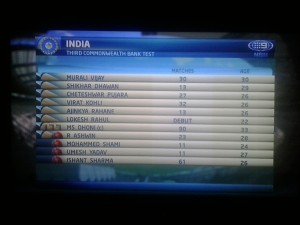 10:30am | Hello again from the MCG. The Australians have won the toss, and will bat first. India have made two changes, and so have Australia.

For Australia, Joe Burns makes his debut, replacing Mitchell Marsh, and Mitchell Starc is out for Ryan Harris.

It’s Boxing Day at the Melbourne Cricket Ground… we’ve got 60,000 people in ready for the first ball. The players and the umpires are on their way to the centre, and we’re PUMPED!

Ishant Sharma will bowl the opening ball to Chris Rogers, and waiting for us in the Commentary Box are Ian Healy, Mark Taylor, and you guessed it, Bill Lawry!

Shane Watson is the new man in.

It’s drinks here on the first morning at the MCG.
Australia sit at 1/44, after winning the toss, and electing to bat first.
David Warner went for a duck, but since then, it’s been a captivating contest between bat and ball.

It’s 1/44, as we take you back to the commentary box, and say good morning to Ian Chappell, James Brayshaw and Mark Taylor!

It’s been a very entertaining morning of Cricket at the MCG, and Australia have fought back nicely, after a disappointing start, losing David Warner for a duck… it was 1/0 after 3, but Rogers and Watson have combined for an unbeaten 92-run partnership as we get to LUNCH.
Watson, due for a big one we’re told… he’s been the subject of a bit of criticism in the lead-up to this game, some wondering why he wasn’t dropped, but he’s answering the critics, and if he continues to play like this, maybe the pressure should be placed on him more often, as he seems to be handling it alright!
More from the MCG at 1:10pm AEDST!

1:10pm | It’s a magnificent day for Cricket at the MCG… fine and sunny, just the way we like it!
We’re getting ready for the second session of play. Can Watson and Rogers continue the good work they started this morning, and reach firstly 50, then possibly triple figures?

To find out, let’s go up to the Commentary Box, and say hi to James Brayshaw, Mark Taylor and Bill Lawry!

1:40pm | It’s been a really good half-hour for the Aussies, as both Watson and Rogers have passed 50, and they’re continuing to build a very solid partnership, which is putting India under some pressure!
Change in the commentary box, in come Ian Healy, Michael Clarke and Michael Slater!

1:55pm | GOT HIM!!! PLUMB LBW!!! 2 WICKETS IN 7 BALLS FOR INDIA, AND THEY’RE GOING TO GET A CRACK AT TWO FRESH BATSMEN… WATSON GETS HIS BIGGEST SCORE OF THE SERIES, YET STILL GETS OUT LBW!

Shaun Marsh joins Steve Smith… 2 new batsmen for the Indians to bowl at, and the momentum has swung again!

2/82 in that session for Australia, and those wickets fell pretty closely together, as both Rogers and Watson failed to build on their half-centuries.

Shaun Marsh and Steve Smith have held the ship together since, but India have kept it tight, and we have an even contest at TEA on Boxing Day!

It’s been slow going for the Aussies, but once Smith gets his eye in, he’ll play the shots that we’ve seen him play so freely in the previous two tests.

3:40pm | GONE!!! Another edge from an Australian batsmen sends the ball straight into the hands of Dhoni, and Shaun Marsh is on his way!

GONE!!! GOT HIM!!!
Bottom edge, and it’s a short-lived debut at the crease for Joe Burns!

Well, that’s STUMPS on Boxing Day at the Melbourne Cricket Ground, and what a day it’s been. Compelling Test Match Cricket, and Australia finish with their nose in front, but not by much… that was a grinding contest between bat and ball… a good old fashioned day of Test Cricket.

India’s bowlers kept it tighter than they have all summer… they held Australia to less than 3 an over, and all credit to India as well… 90 overs in 6 hours… We finish on time for the first time this summer.

Hope you enjoyed it today. Plenty of action to come from Melbourne tomorrow… play resumes at 10:30am AEDST tomorrow morning. Goodnight!