2pm | It’s one of the big matches in World Cup 2015… Australia against Sri Lanka at the Sydney Cricket Ground… vitally important match for both these teams, as second position in Group A is on the line.
New Zealand will cement first if they beat Afghanistan today.

Hello everyone. Welcome to our coverage of the 2015 ICC Cricket World Cup.
We’ve had an amazing tournament so far, and no doubt, we’re in for another belter here today.

The news off the top, is that Michael Clarke has won the toss, and the Australians will bat first!

Shane Watson is back in the side, so to Xavier Doherty… making way for them are Mitchell Marsh and Josh Hazlewood.

More from the Sydney Cricket Ground for you in just a few moments. 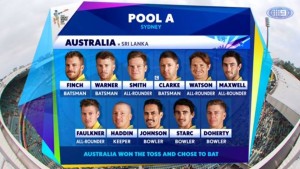 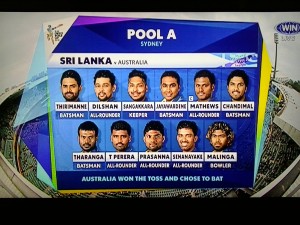 Hello again from the Sydney Cricket Ground, where players and umpires have made their way to the centre.

David Warner and Aaron Finch will open the batting for the Australians, after Michael Clarke won the toss, and decided that his team would bat first… Lasith Malinga has the new ball in hand, and we’ve got a massive crowd in at the SCG, PUMPED and ready to go!

Waiting for us in the Commentary Box are Russell Arnold, Mark Taylor and Sanjay Manjrekar!

GOT HIM!!!
Brilliant bowling from Lasith Malinga… the slower ball works, and Warner… the real danger man in the top-half of the batting order is GONE!

Steven Smith is the new man in, in front of his home crowd at the SCG!

The Australians are racing along at the Sydney Cricket Ground, with Smith and Clarke batting superbly.
They’ve put on 108 for the third wicket, and have both brought up their own half-centuries.

Clarke looks to be in nice touch, in just his second innings in this world cup, while Steven Smith’s dream summer is continuing, as he chases yet another century.

21 overs to go, and 300 now surely the target for Australia. Continuing in the commentary box are Damien Fleming, Shane Warne and Brendon Julian!‬

Good innings from the captain… he went at a run a ball, but in the end, Malinga got his man… it’s 3/175!
This post updates

4:38pm | GOT HIM!!! BOTH THE MEN THAT WERE SETTLED ARE BACK IN THE PAVILION!
STEVEN SMITH HAS HELD OUT TO THE MAN IN THE DEEP, WHO TOOK A MAGNIFICENT CATCH, AND ALL OF A SUDDEN, THE AUSSIES ARE FOUR DOWN, AND THE MOMENTUM HAS SLIGHTLY SWUNG IN FAVOUR OF THE LITTLE ISLAND NATION!

Excellent innings from Steven Smith, but it ended too soon for him, and his team.
Shane Watson is the new man in, as we go back to the SCG!

HE’S GOT IT… A WORLD CUP HUNDRED TO SAVOUR FROM GLENN MAXWELL.
THE BIG SHOW HAS LANDED AT THE SYDNEY CRICKET GROUND TODAY… HE’S GOT HIS FIRST ODI CENTURY, THE FASTEST WORLD CUP CENTURY BY AN AUSTRALIAN, AND THE SECOND FASTEST EVER!

This has been a brilliant partnership from Watson and Maxwell… a potential match winner, after they came together at 4/177. They’ve added 155 in no time… the job isn’t done yet, but one thing is for sure… Sri Lanka will have a big chase on their hands tonight!

To take you through the last few overs, Mark Waugh, Damien Fleming and Mark Taylor!

5:48pm | GONE… HE’S FINALLY MISHIT ONE, AND THIS SENSATIONAL INNINGS FROM GLENN MAXWELL COMES TO AN END!

Great innings… standing ovation from this crowd at the SCG… memorable day in the life of Glenn Maxwell… his first ODI hundred, and it could be the difference here tonight. It’s 5/337!

OUT!!! AT LONG LAST, SRI LANKA GET THEIR MAN… SHANE WATSON PLAYED WELL FOR 67, BUT COULDN’T FINISH THE JOB OFF IN THE WAY HE WOULD’VE WANTED!

6:12pm | GONE… HADDIN JOINS THE LIST OF LATE DISMISSALS IN THE AUSTRALIAN INNINGS… 25 FROM 9, AND SACRIFICING THE WICKET FOR THE SAKE OF ATTEMPTING TO SCORE EVERY LAST RUN THEY CAN. IT’S 8/373!

What a performance from Australia… they lost a flurry of wickets in the last 10 overs, but not before posting their second biggest score in this World Cup, and their biggest ever in ODI’s at the Sydney Cricket Ground.

In the last three balls, Mitchell Starc was run out without facing a ball… but there wasn’t too much added to the total, but the job was done by Maxwell, Watson, Smith and Clarke, after the openers failed to fire.

Hello again from the Sydney Cricket Ground, where Match 32 of the 2015 ICC Cricket World Cup is about to resume, after Australia batted out their 50 overs this afternoon, scoring 9/376, punishing Sri Lanka to every corner of this iconic ground.

Glenn Maxwell was the standout, but there were solid contributions from Watson, Clarke and Smith as well.

Difficult task for Sri Lanka, there is no doubt about that… 377 the target… the second biggest ever on the SCG. It would be the biggest successful chase at this venue IF they pull it off.

Second spot in Group A is on the line here, after New Zealand sealed top spot today, following a 6-wicket win over Afghanistan.

Mitchell Starc will open the bowling for Australia, as we join your commentators, Brendon Julian, Russell Arnold and Shane Warne!

We’ve got a game on our hands at the Sydney Cricket Ground, there is no doubt about that… we knew the Sri Lankans would fight, but they’re playing the game of their life at the moment, and it’s two old hands leading the way.

Dilshan and Sangakkara came together at 1/5… they’re now 1/119 at DRINKS at the end of the 17th over.
They’re going along comfortable, although the asking rate is still higher than 7 an over.

Kumar Sangakkara has reached 14,000 ODI runs in this innings, as both he and Dilshan have gone past fifty.

Continuing in the commentary box for you are Damien Fleming, Russell Arnold and Michael Slater!

GOT HIM!!! YOU NEVER TAKE ON THE ARM OF MICHAEL CLARKE, AND MAHELA JAYAWARDENE HAS JUST FOUND OUT WHY!
BRILLIANT FIELDING, AND A HUGE WICKET FOR AUSTRALIA, 3/188!

9:03pm | GOT IT!!! KUMAR SANGAKKARA BECOMES THE FIRST MAN TO SCORE THREE CONSECUTIVES CENTURIES IN A WORLD CUP TOURNAMENT!

A MAGNIFICENT PLAYER, LEADING BY EXAMPLE, AND IT GIVES HIS TEAM HOPE OF VICTORY, IN WHAT HAS BEEN A COMPELLING GAME OF CRICKET, THAT IS MUST WIN FOR BOTH TEAMS!

GONE!!! THAT’S THE BIG ONE… GREAT OUTFIELD CATCH FROM AARON FINCH, AND ONE OF THE GREATS OF THE GAME DEPARTS THE SCG… SANGAKKARA GONE, AND IT’S 4/201!

It’s all happening at the Sydney Cricket Ground… within 5 minutes, the two batsmen who were at the crease, and looking good, are back in the dressing room… and it’s starting to fall to pieces for Sri Lanka.

Dinesh Chandimal has retired hurt, with a hamstring injury… and that’s a big blow to Sri Lanka’s chances… the young man had just passed 50 in no time, and was looking very dangerous!

Just moments ago, Perera was dismissed, after attempting to hit one out of the park, but he didn’t get hold of it, and Xavier Doherty got amongst the action, taking a simple catch!

Russell Arnold, Shane Warne and Michael Slater take over the commentary, as we reach a gripping conclusion!

10:23pm | GONE!!! AND, WITH CHANDIMAL RETIRED HURT, THEY ONLY NEED ONE MORE WICKET, THE AUSTRALIANS… VICTORY IS IN SIGHT!

GONE!!! PRASANNA HOLDS OUT TO DOHERTY… STARC GETS A SECOND WICKET, AND THE MATCH HAS BEEN WON BY AUSTRALIA!

That’s then is that… a great performance from the Australians… 377 was always going to be a difficult chase for Sri Lanka, but credit where it’s due, they were right in that until the time Chandimal departed the field, and then it kind of fell away!

Glenn Maxwell is a deserving Man of the Match, after a smashing performance with the bat… the fastest century in ODI Cricket by an Australian, and the second fastest in a World Cup.

That win should all but secure second place in Group A for Australia here at the 2015 Cricket World Cup.

Sri Lanka will play them on Wednesday, whereas Australia have a little bit of a break now, and will face them Saturday!

Looking forward to the final week of group games here.

England play Bangladesh tomorrow, and we look forward to your company for the Quarter-Finals, beginning on the 18th of March.

For now, from the Sydney Cricket Ground, after a magnificent day of Cricket, in which Australia came out victorious by 64 runs… it’s goodnight!