After a convincing performance from South Africa last night in Sydney, the World Cup carnival makes its way to Melbourne, and to the famed Melbourne Cricket Ground. Today, it’s the cream of the crop in Group B, India taking on Bangladesh, who famously beat England to secure their quarter-final berth.

Welcome to our coverage from the MCG, where it’s fine at the moment, but like yesterday, rain is forecasted, but remember, if we can’t finish the game today, we do come back tomorrow!

Bangladesh are the underdogs here, no question about that, but they bring with them a lot of confidence after the win against India, and they’d also have a spring in their step after coming so close to victory against New Zealand last Saturday Night.

The washout against Australia was integral to their knockout qualification… a point they otherwise may not have got.

India, undefeated all the way through… stark contrast to their performance in Australia prior to the World Cup, where they couldn’t get a win to save themselves, but as was the case in 2011, they’re a force to be reckoned with at the back end of a major tournament… they always manage to find an extra gear when it matters most, and Bangladesh are facing an uphill battle today, if they’re to knock the defending champions off.

The news off the top from the centre, is that M.S Dhoni has won the toss, and India will bat first! 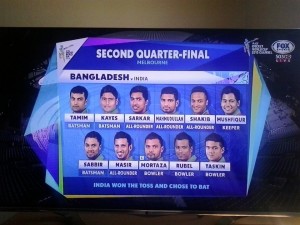 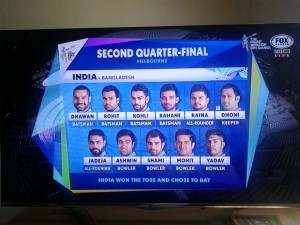 We’re just 15 minutes away from the start of play. We’re looking forward to it immensely… the 2nd Quarter-Final is NEXT!

It’s a healthy, enthusiastic and noisy crowd in at the Melbourne Cricket Ground for the 2nd Quarter-Final between India and Bangladesh.

South Africa are already through to Tuesday’s Semi-Final at Eden Park… the winner of this game will join them in the last four, and take on the winner of tomorrows game between Australia and Pakistan at the Sydney Cricket Ground this time next week.

The umpires are making their way to the centre… the anthems have been sung, and now the Indian Batsmen make their way out to the middle… It’s expected that they’ll progress today, so the pressure will be on right from the word go, and they’ll be expected to perform.

Waiting for us in the Commentary Box are Shane Warne, Sourav Ganguly and Sanjay Manjrekar!

3:05pm | India 0/36 (7)
Solid start for India… 36 for no loss after seven overs… they’re going along quite nicely, as Dean Jones, Rahul Dravid and Harsha Bhogle take up commentary!

GOT HIM!!! SHIKHAR DHAWAN IS GONE… BANGLADESH HAVE THEIR FIRST… HE’S STUMPED, NO MORE THAN 10cm SHORT OF HIS CREASE, BUT HE MUST GO… IT’S 1/75!

Virat Kohli is the new man in for India!

2 wickets in 9 balls have really changed the flow of this match, as Ajinkya Rahane comes to the centre to take guard!

4:30pm | India 2/108 (26.4)
There it is… FIFTY for Rohit Sharma… certainly not his fastest one, but definitely one he needs to go on with for India… things have really slowed up since the dismissals of Dhawan and Kohli, but this man is key to India’s success, and a semi-final berth.

GOT HIM… GOOD CATCH… INDIA ARE THREE DOWN… THE TIGERS ARE FIGHTING HARD!
RAHANE IS ON HIS WAY, AND INDIA ARE ON THE BACK FOOT HERE AT THE ‘G’!

Raina joins Sharma, and in the commentary box are Nasser Hussain, Dean Jones and Sanjay Manjrekar!

We’ve got some rain here at the MCG… We’re going off, and this isn’t good for either team.
India just starting to get full control of the match, and Bangladesh trying desperately to get a wicket, but to no avail…
This will upset the rhythm of the match just a little bit, but the good news is the rain hasn’t lasted all that long, and we’ve only been delayed by about seven minutes.

Suresh Raina and Rohit Sharma have really motored along since teaming up at the wicket… they’ve added 71 runs, 38 of which have gone to Raina at a run a ball… meanwhile Sharma is heading towards a century, and that all important role of being there at the end of the innings… he’s headed for a big score if he can do that… it may bat Bangladesh out of the game.

Back to the commentary box we go, as the players have made their way back out to the centre… it was one of those short, sharp rain delays… no sooner did we go off, than the rain stopped!

Well, it’s all happening here… a NO BALL, that shouldn’t have been has cost Bangladesh a needed wicket, and now Suresh Raina has brought up a half-century!

5:58pm | India 3/228 (41.5)
THERE IT IS… A CENTURY FOR ROHIT SHARMA… HE NEEDED TO PLAY A BIG ROLE TODAY, ESPECIALLY AFTER TWO WICKETS FELL EARLY, AND THAT’S EXACTLY WHAT HE’S DONE!
BRILLIANT INNINGS, BUT HE NEEDS TO CONTINUE, AND NO DOUBT, THAT WILL BE THE INTENTION!
3/228 IN THE 42nd OVER, AND SURELY ARE HEADING NORTH OF 300 NOW!

6:07pm | India 4/237 (43.5)
GONE!!! SURESH RAINA HAS JUST SENT ONE SKYWARD, TRYING TO HIT IT OUT OF THE PARK, TRYING TO SCORE QUICK RUNS, BUT INSTEAD OF HITTING IT LONG, IT WENT HIGH, AND STRAIGHT INTO THE WAITING HANDS OF BANGLADESH’S WICKET-KEEPER!

Good cameo from Raina, but  he’ll be disappointed with how it ended. 4/237…

Sourav Ganguly, Sunil Gavaskar and Nasser Hussain will talk you through to the end, as M.S Dhoni makes his way to the crease!

BOWLED HIM!!! FINALLY… THE WICKET BANGLADESH SO DESPERATELY SOUGHT… ROHIT SHARMA IS GONE… ANOTHER GREAT INNINGS, FROM A SUPREMELY GOOD CRICKETER! IT’S 5/273!

3 overs left… 300 still more than likely for India, and that’s a good omen, as no team has ever successfully chased a target over 300 on this ground!

GOT HIM… MISTIMED SHOT FROM DHONI, AND HE LOSES HIS WICKET AS A RESULT!

Only 6 runs off that last over, but boy oh boy, didn’t India fly home after the second drinks break in that innings… 6/302 after 50. They’ve managed to score 300+ on this ground for the second time in the 2015 World Cup… It’s a massive total, one that Bangladesh may just struggle to chase.

Rohit Sharma and Suresh Raina were the standout performers for India, and the best of the bowlers for Bangladesh was Taskin Ahmed, who took 3/69 in his ten.

So, Bangladesh will chase 303 for victory… that run chase isn’t too far away, and we’ll bring it to you LIVE. See you soon!

7:15pm | Hello again from the Melbourne Cricket Ground… the ICC World Cup, and the 2nd Quarter-Final… it’s India against Bangladesh, and it’s a formidable total that India have posted… 6/302, and the run chase won’t be an easy one for Bangladesh… it’s about to commence, so let’s go to the commentary box, and say good evening to Shane Warne, Rahul Dravid and Sanjay Manjrekar!

GONE! GOOD CATCH FROM M.S DHONI, AND INDIA HAVE THEIR FIRST.

Soumya Sarkar is the new man in.
OH NO… TERRIBLE MIX UP… AND IT’S A RUN OUT FOR INDIA… BANGLADESH HAVE LOST TWO IN TWO BALLS, AND INDIA ARE ON TOP AT THE MCG!

Now, the key man is in, and he needs another century if Bangladesh are to win this tonight, as Nasser Hussain, Dean Jones and Harsha Bhogle take over commentary!

It’s DRINKS at the Melbourne Cricket Ground, and the Bangladesh Tigers are fighting hard… the repair job has begun. 38 runs added in the last ten, but no wickets lost… 34 overs left, and still 232 to get, but that is achievable if these two stay there.

GOT HIM… GOOD CATCH, RIGHT ON THE BOUNDARY… SKILFUL PLAY FROM SHIKHAR DHAWAN TO ENSURE THAT HE WASN’T NEAR THE BOUNDARY ROPE WITH THAT BALL IN HIS HAND… AND MAHMUDULLA IS GONE!

So, the big hope for Bangladesh is back in the shed, and India are firm favourites now!

GOT HIM… THICK EDGE, CAUGHT BEHIND… THIS GAME IS FAST FALLING OUT OF BANGLADESH’S GRASP!
SARKAR IS GONE… IT’S 4/90!

GONE!!! THEY’VE GOT ANOTHER ONE, AND THIS TIME IT’S AL HASAN, ONE OF THE BETTER BATSMEN FOR BANGLADESH!

5/104, AND INDIA AREN’T FAR AWAY FROM BREAKING INTO THE TAIL FOR ONE, AND A BERTH IN THE SEMI-FINAL TO BOOT!

Rahman joins Rahim and Mark Waugh has moved into commentary with Harsha Bhogle!

GONE… NOT THE WAY BANGLADESH WOULD’VE LIKED TO START THE POWERPLAY… AND INDIA ARE INTO THE BANGLADESH TAIL!

GONE… WELL, IT WAS GOOD WHILE IT LASTED… FOUR, FOUR, THEN OUT… HOSSAIN GOES, AND SO TO DOES THE LAST HOPE FOR BANGLADESH… INDIA HEADING FOR THE SEMI-FINAL. IT’S 7/189!

GONE… STRAIGHT DOWN THE MAN’S THROAT… RAVI ASHWIN IS THE FIELDER, AND INDIA ARE MAKING THIS LOOK VERY EASY NOW!

GONE… IT’S OVER… INDIA ARE OFF TO THE WORLD CUP SEMI-FINAL… 11 WINS ON THE TROT AT WORLD CUP LEVEL, AND IT’S EITHER PAKISTAN OR AUSTRALIA THAT WILL FACE THEM NEXT THURSDAY IN SYDNEY!

India are in some form at the moment… 11 wins on the trot in World Cup Cricket, and their bowlers are in sparkling form… 70 wickets in this tournament… YEP, they’ve bowled all of their opponents out so far, and they’re looking dangerous.

Bangladesh can hold their heads high, they’ve played wonderful cricket throughout the tournament to get to the quarter-finals, but India were far too good tonight… claiming wickets at crucial times, gaining the momentum, and running with it.

They’ve won by 99 runs, and are heading to the SCG on Thursday, where they’ll meet either Australia or Pakistan.

Rohit Sharma is the Man of the Match tonight, and rightly so… that was a magnificent innings earlier today… 137 off 126, and India’s success is mainly due to that performance… they were in trouble at 2/79 and 3/115, but the composure by Sharma, to battle through, and get the innings back on track with Suresh Raina is why they got to 300, and beyond Bangladesh’s reach!

Plenty to come… two big games coming up over the next two days, with both the host nations in action… let’s have a look at what’s coming your way:

Brilliant performance from India… winners by 99 runs, and off to Sydney next Thursday.
We hope you enjoyed it. We’ll see you tomorrow in Adelaide… but, for now, from the Melbourne Cricket Ground, we wish you goodnight!