It’s the match that all Australians have been waiting for… the 3rd ICC Cricket World Cup Quarter-Final between Australia and Pakistan.
Two quarter-finals down, and two to go… South Africa and India are already through to next week, today in Adelaide, we’ll find out who is on their way to the Sydney Cricket Ground to face the defending champions next Thursday!

Hello everyone… Welcome to Adelaide, and welcome to our coverage of the 3rd Quarter-Final.

Australia finished second in their group, after a washout with Bangladesh really cost them a point, and then that thriller at Eden Park was won by New Zealand, with only one wicket in hand, on an extraordinary afternoon in Auckland.

As for Pakistan, Net Run Rate (NRR) was their downfall… they beat South Africa in the preliminary stage, and both sides lost to India, and they were tied on points heading into the knockout stage, but South Africa’s Net Run Rate was superior, and that’s why they finished 2nd. and Pakistan 3rd in Group B.

2pm | Australia start as favourites today, but it’s Pakistan who’ve scored first blood… Misbah-ul-Haq has won the toss, and Pakistan will BAT first.
For Australia, one change… Josh Hazlewood is in for Pat Cummins. 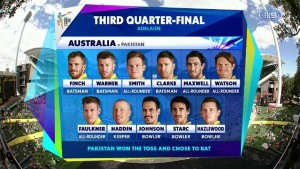 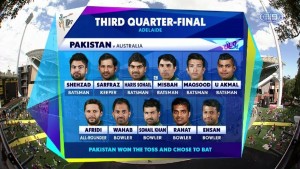 Live play for you real soon!

Hello again from the Adelaide Oval… it’s the 3rd Quarter-Final between Australia and Pakistan… the 1992 winners have won the toss… they’re batting first. Sarfraz Ahmed is out there with with Ahmed Shehzad, Mitchell Starc has the new ball, and 50,000 people are in the Adelaide Oval, and PUMPED, as we go up to the commentary box, and say hi to Shane Warne, Wasim Akram and Michael Slater!

The new man in for Pakistan is Haris Sohail!

It’s the first drinks break of the afternoon at the Adelaide Oval… a brilliant start for Australian team… Pakistan have made a habit of losing two wickets in the opening ten overs in this tournament, and they did so again today, with Starc and Hazlewood getting the early strikes.
Now, it’s up to Sohail and Misbah to steady the ship, and get this batting effort back on track… they need to score 270-280 to be competitive one feels, and that’s still possible provided they don’t lose too many wickets in the next 15 overs.

Let’s get back to the action, Wasim Akram, Allan Border and Michael Atherton take over commentary!

GONE… BOWLING CHANGE WORKS FOR MICHAEL CLARKE… GLENN MAXWELL GETS A WICKET, AND IT’S AN IMPORTANT ONE… A 73-RUN PARTNERSHIP COMES TO AN END FOR PAKISTAN… MISBAH IS GONE! IT’S 3/97!

GONE… ANOTHER ONE FOR AUSTRALIA, AND A THIRD WICKET THAT HAS COME FROM A THICK OUTSIDE EDGE TODAY!

GONE… UMAR AKMAL WAS JUST GETTING SETTLED, AND HIS PICKED OUT THE FIELDER PERFECTLY… FIVE DOWN FOR PAKISTAN, AND AUSTRALIA ARE RIGHT ON TOP AT THIS STAGE HERE IN ADELAIDE. IT’S 5/124!

That dismissal brings the weapon that is Shahid Afridi to the crease, as Michael Atherton, Brett Lee and Michael Slater take over commentary!

GOT HIM!!! THE KEY WICKET FOR AUSTRALIA… SHAHID AFRIDI HOLDS OUT TO AARON FINCH, AND IT’S A SECOND WICKET FOR JOSH HAZLEWOOD!

Three catches have been taken behind the stumps so far today… the other three have gone out to Aaron Finch in the deep.
He’s in fine form, and his team are on top… it’s 6/158!

GONE… MITCHELL JOHNSON HOLDS ON TO IT, AND THE SEVENTH WICKET HAS FALLEN!

Hazlewood has three, and the tail is now well and truly exposed for Pakistan… 7/188!

To take you through the rest of this innings, Sourav Ganguly, Allan Border and Damien Fleming!

One wicket to get for Australia… as Rahat joins Ehsan, and we rejoin Messers Ganguly, Border and Fleming!

GONE… THE JOB IS COMPLETE FOR AUSTRALIA, AND PAKISTAN HAVE BEEN BOWLED OUT FOR 213… AS ESHAN HOLDS OUT TO STARC IN THE DEEP… FAULKNER GETS A WICKET, AND THE TARGET IS 214!

So, a very good bowling performance from the Australians, and I dare say they’ll be very happy with where things stand after the first half of this match, and they’ll be quietly confident of progressing to the semi-final tonight!

The bowling was very good. Hazlewood the standout with 4/35 in his ten. Mitchell Starc and Glenn Maxwell claimed two each, with the remaining wickets split between Johnson and Faulkner

So, the task is pretty simple… 214 the target from 50 overs. That run chase gets underway at 6:45pm AEDST… we look forward to your company then.

6:45pm | Hello again from Adelaide, where Australia are about to begin their innings, in pursuit of 214 runs, for a spot in the World Cup semi-final against India.

David Warner and Aaron Finch are the opening batsmen… make no mistake, this won’t be an easy task… the Pakistan bowling attack is a good one, and there’s still a tinge of green on this pitch, so who knows what we in store for… what we do know is, this will be compelling viewing, as we go up to the Commentary Box, and say Good Evening to Wasim Akram, Shane Warne and Michael Slater!

GONE… PLUMB LBW… FINCH IS ON HIS WAY, BUT HE’S DECIDED TO REVIEW… AND THAT WON’T SAVE HIM… NO EDGE ON THE BAT, THE BALL SMASHING INTO MIDDLE AND LEG STUMP, AND AUSTRALIA HAVE NOT ONLY LOST THEIR FIRST WICKET, BUT THEIR REVIEW AS WELL. 1/15!

Steven Smith is the new man in for Australia!

GONE… WARNER HAS BEEN CAUGHT, AND PAKISTAN HAVE THEIR MAN… A SECOND WICKET TO GO WITH IT, AND AS I SAID AT THE START OF THE INNINGS, THIS WON’T BE EASY FOR AUSTRALIA… PAKISTAN ARE FIGHTING HARD. IT’S 2/49!

OUT!!! BRILLIANT SHORT BALL FROM WAHAB, AND IT GETS THE BETTER OF THE AUSTRALIA CAPTAIN, AND HE LOBS IT STRAIGHT INTO THE HANDS OF THE MAN AT SHORT LEG!

BRILLIANT BOWLING FROM PAKISTAN… THEY’RE RIGHT IN THIS… IT’S 3/59!

SHOT… FOUR ALL THE WAY, AND A THIRD CONSECUTIVE HALF-CENTURY FOR STEVEN SMITH!
WHAT A SUMMER THIS YOUNG MAN IS HAVING… CONTINUING TO SHINE, AND THIS INNINGS IS ONE OF THE MORE IMPORTANT ONES HE’S PLAYED THIS SUMMER!

Glenn Maxwell is the new batsman, and there’s still hope for Pakistan!

THERE IT IS… FIFTY FOR SHANE WATSON!!!
A MASSIVE INNINGS UNDER IMMENSE PRESSURE, AND HOW PAKISTAN WILL BE RUING THAT MISSED OPPORTUNITY NOW!
THIS IS A MATCH WINNING PERFORMANCE FROM WATSON… AN INNINGS THAT HE’LL REMEMBER, AND ONE THAT’LL POSSIBLY BUY HIM A LITTLE BIT LONGER IN THE AUSTRALIAN COLOURS, AND ONE THAT WILL BUY HIS TEAM A TICKET TO THE WORLD CUP SEMI-FINAL!

4/183, as we join Allan Border, Michael Atherton and Brendon Julian in the Commentary Box!

SHOT… FOUR RUNS, AND A PLACE IN THE SEMI-FINALS FOR AUSTRALIA!!!
SHANE WATSON SCORES THE WINNING RUNS, AND AUSTRALIA ARE ON THEIR WAY TO THE SYDNEY CRICKET GROUND, FOR A DATE WITH INDIA!

Well, that was a good performance from the Australians when it mattered most… It wasn’t their best, but far from their worst… and now, India await.

Pakistan were in that for a long while, but they missed vital opportunities to dismiss both Watson and Maxwell, and that really cost them in the end.

Watson and Maxwell ended up getting that run rate back above 6 an over, and Australia coasted to victory, with 97 balls to spare.

Great performances from Maxwell, Smith and Watson with the bat, but it was Josh Hazlewood, who bowled superbly, that was selected as tonight’s Man of the Match, and that’s a brilliant boost to him, as he’s been fighting with Pat Cummins for that spot in the side, and you’d dare say he’s cemented it now!

Pakistan will rue their missed opportunities… they were impressive, without capitalising on their chances, and that really handed Australia the chance to seal this match a lot easier than they otherwise should have, but the highlight will be that electric spell of fast bowling from Wahab Riaz, who had the Australian batsmen on edge, just trying to see him off unscathed, so they could get on with the task at hand… he got 2/54 in 9, but it wasn’t enough for Pakistan, who won the last World Cup contested on Australian and New Zealand soil.

Speaking of New Zealand, that’s what awaits us… 2 cracking matches coming up in New Zealand over the next few days… the first is the 4th Quarter-Final… the winner of that is off to Auckland on Tuesday, for the 1st Semi-Final.

So, we know our second semi-final will be in Sydney, and we know it’ll be India against Australia, but who will take on South Africa in the first?
We’ll have that answer for you tomorrow.

That Australia-India game though… that’ll be in front of a packed house at the Sydney Cricket Ground, with interest all around the land… the cutting edge of the tournament is here!

We hope you enjoyed our coverage today. JOB DONE for the Australians… they’re heading to Sydney, heading for India… 2nd semi-final, Australia and India. That is something to savour.

We’ll see you tomorrow morning from 11:30am AEDST. Goodnight!