11:15am | Three quarter-finals down, and the three favourites have progressed.
Now, all eyes are on the cake tin, better known as Westpac Stadium in New Zealand, for the final quarter-final between New Zealand and the West Indies.
Hello everyone, and welcome to our coverage of the fourth quarter-final… the winner of this game will face South Africa at Eden Park on Tuesday.
New Zealand come here on the back of an outstanding summer… a series win against Sri Lanka, and an undefeated run through the preliminary matches of the 2015 ICC Cricket World Cup, and unlike most teams, they haven’t played a match outside of New Zealand yet… the only one they’ll have to play in Australia, should they make it that far, is the final.
Stunning performances against Australia and England highlight their run to the knockout stage… it’ll be interesting to see how they handle the pressure of knockout cricket.
West Indies on the other hand, lost to Ireland, but victories against Zimbabwe, Pakistan and the UAE see them through, ahead of Ireland, for this knockout phase.
New Zealand start as firm favourites, but their captain, Brendon McCullum is the key man… we’ve seen New Zealand come under pressure when he doesn’t fire…
Same for the West Indies… they’ve got a couple of good players, but so much expectation is placed on Chris Gayle at the top of the order.
The bowlers will play their part as well… Tim Southee and Trent Boult have fired in this tournament, and for the West Indies, Jerome Taylor and Jason Holder hold the key.
The news off the top from the centre in Wellington, is that New Zealand have won the toss, and they’ll bat first.
Here’s a look at the two teams for you… play is only a matter of minutes away! 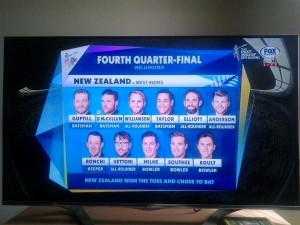 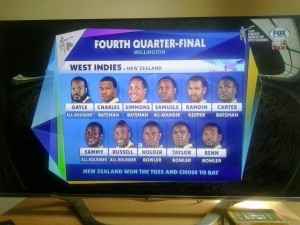 Hello again from Wellington… it’s a great atmosphere here at the Westpac Stadium… people still streaming through the turnstiles as we approach the start of play. It will be a FULL HOUSE before too long, and they won’t leave until they know the fate of their beloved Black Caps.

Brendon McCullum and Martin Guptill are the opening batsmen for the home side, and Jerome Taylor has the new ball in hand, and is ready to go, as we go up to the Commentary Box, and say hi to Ian Bishop, Ian Smith and Alan Wilkins!

GONE!!! GOOD CATCH, AND BIG WICKET FOR THE WEST INDIES… POSSIBLY THE MOST IMPORTANT WICKET IN THEIR WORLD CUP CAMPAIGN!

GONE!!! GOOD CATCH, CHRIS GAYLE!
THEY GOT THE CAPTAIN CHEAPLY, AND NOW THE VICE-CAPTAIN DEPARTS BEFORE HE REALLY GOT THE CHANCE TO GET GOING! 2/89!

Drinks have been taken… Ross Taylor joins Martin Guptil, and moving into the commentary box are Rahul Dravid, Ian Smith and Sanjay Manjrekar!

New Zealand now cruising towards a massive total… with 92 balls left in the innings, they’re 2/183, as we rejoin Rahul Dravid, Ian Smith and Ian Bishop!

OH… NO… MIX UP… MUST BE OUT! SHOULD BE OUT! IS OUT!!!
TAYLOR HAS TO GO… IT’S NOT THE FIRST TIME THESE TWO HAVE GOT MIXED UP TODAY, BUT IT’S THE FIRST ONE THE WEST INDIES HAVE BEEN ABLE TO TAKE ADVANTAGE OF.

THEY GET TAYLOR, BUT GUPTILL IS LOOKING VERY DANGEROUS AT THE OTHER END… HE’S ADDED 39 IN 17 BALLS SINCE GETTING THE CENTURY, AND NEW ZEALAND ARE RACING ALONG… 3/232!

Corey Anderson is the new man in for New Zealand!

GOT HIM! RUSSELL GETS ANDERSON BEFORE HE GETS THE CHANCE TO GET GOING… GAYLE TAKES THE CATCH, AND THE WEST INDIES HAVE FRACTIONALLY SLOWED NEW ZEALAND’S RUN HOME. IT’S 4/278!

HE’S GONE FOR IT… THAT’S FOUR!!! STRAIGHT DOWN THE GROUND… MARTIN GUPTILL BECOMES THE FIRST KIWI TO SCORE A DOUBLE-CENTURY IN THE LIMITED OVERS FORM OF THE GAME!

HE’S ALREADY PASSED HIS HIGHEST SCORE, THE HIGHEST WORLD CUP SCORE BY A NEW ZEALANDER, AND THE HIGHEST ODI SCORE FOR THE NATION AS WELL, AND NOW HE JOINS A SPECIAL GROUP OF PLAYERS WHO’VE SCORED 200 OR MORE IN AN ODI INNINGS!

Well, take a breath Australia… that was an unbelievable performance from the Black Caps at Westpac Stadium… Martin Guptill has batted the innings out… he’s scored 237 off 163 balls… his last 137 runs come off just 62 balls.

It’s the highest ever individual score in a Cricket World Cup, the highest ever by a New Zealander, and the second highest in the game, behind Rohit Sharma, who scored that magnificent 264 against Sri Lanka last year.

YEP, the records have been smashed in Wellington this afternoon, and now it’s an uphill task for the West Indies, if they’re to keep their World Cup hopes alive… New Zealand on the other hand, have one hand on that ticket to the semi-final against South Africa on Tuesday.

When McCullum was dismissed cheaply, and Williamson went for 33, we thought the West Indies might be chasing something gettable… until Guptill unleashed… he absolutely smashed them this afternoon, and has set-up the match for his team perfectly!

The West Indian bowlers just couldn’t take a trick… Taylor got 3/71, and Russell was smashed all over the park, but still managed 2/96.

The last 100 runs came from just 33 balls… just let that sink in for a moment. Extraordinary!

New Zealand have set the West Indies a target of 394… the boys from the Caribbean won’t be enjoying their dinner.
We’ll have the run chase for you at 4:15pm AEDST.

Hello again from Wellington… the news, for anyone just joining us, is that Martin Guptill has stolen the show today… 237 from 163 balls… 24 fours, 11 sixes, as New Zealand have posted 6/393 in their 50 overs, in this the 4th Quarter-Final between the Black Caps and the West Indies.

So, the asking rate is 7.88 an over. Johnson Charles and Chris Gayle are the opening batsmen… Tim Southee is the bowler, and in the commentary box are Ian Botham, Rahul Dravid and Simon Doull!

OH… WHAT A CATCH… WHAT A CATCH FROM DANIEL VETTORI… WHAT A SCREAMER ON THE BOUNDARY… ONE HANDED CATCH, TO REMOVE MARLON SAMUELS, AND BRING A HAULT TO THIS OPENING ONSLAUGHT FROM THE WEST INDIES!

GAYLE IS STILL THERE, BUT LOSING SAMUELS IS A BIG BLOW… 3/80!

BOWLED HIM!!! THAT’S CHRIS GAYLE… THAT’S ALL BUT CERTAIN VICTORY FOR NEW ZEALAND, AND THAT IS ADAM MILNE GETTING HIS FIRST WICKET!

5/126, AND THIS GAME CONTINUES TO FALL OUT OF THE REACH OF THE MEN FROM THE CARIBBEAN!

New Zealand have all but sealed their date with South Africa, as Sanjay Manjrekar, Rahul Dravid and Alan Wilkins take over commentary!

BOWLED HIM!!! CARTER’S IN SHOCK… HE’S GOT ABSOLUTELY NO IDEA WHAT’S HAPPENED, BUT THE BAILS HAVE BEEN KNOCKED OFF… VETTORI’S GOT A WICKET, AND THE LAST OF THE RECOGNISED BATSMEN IS ON HIS WAY… HE STILL CAN’T BELIEVE IT… IT’S 7/173!

BOWLED HIM!!! NECK AND CROP!

GONE… CHIPPED STRAIGHT TO THE HERO OF THE DAY FOR NEW ZEALAND, WHO TAKES THE SIMPLEST OF CATCHES!

Taylor gone… Sulieman Benn enters the arena, and now it’s only a formality really… NZ are heading to the Semi-Finals for the 7th time, as we rejoin Ian Bishop, Simon Doull and Ian Smith!

GONE… THERE IT IS… VICTORY TO NEW ZEALAND, AND THE THE CAKE TIN HAS ERUPTED, WITH THE CHEERS OF 35,000 KIWIS… IT’S THE BLACK CAPS INTO THE SEMI-FINAL AGAINST SOUTH AFRICA!

It’ll come as no surprise to anyone, that Martin Guptill has been given the Man of the Match award tonight… he was very grounded when he spoke to Alan Wilkins a short while ago, and said that there’s still plenty of work to do… so, he might be the hero today, but he’s mind is very much on the task at hand.

643 runs today… in just 80.3 overs, an accumulated run rate of 7.99 an over… simply extraordinary day of Cricket, and as we said during the coverage, if the West Indies weren’t losing wickets so quickly, they would’ve given the target of 394 a real shake, there’s no doubt about that.

62 fours, and 31 sixes today… a total of 434 of the 643 runs that were scored today, were scored in boundaries, which just goes to show you how much this game has evolved in recent years.

The Kiwis are on fire though… their bowlers are performing well, and we’ve seen that against England and Australia already, so it’ll be interesting to see what they’ve got in store for South Africa… and, as we’ve already detailed today, their batsmen are on fire as well.

So, New Zealand qualify for their 7th World Cup Semi-Final… they’ll take on South Africa, who lost the last game they played at Eden Park… that was against Pakistan, who were, of course, eliminated by Australia last night.

Semi-Finals coming up on Tuesday and Thursday… Let’s have a look ahead for you:

Brilliant performance from New Zealand… they were far too good for the West Indies in the end… the Windies went hard, which created opportunities… the majority of which, the Black Caps were able to capitalise on.

Guptill was sensational with the bat… the second highest score in ODI history, the highest ever at a World Cup, and he smashed all the New Zealand records in the process… and then, there was Daniel Vettori, who snared the catch of the World Cup on the boundary line… All in all, a dominant performance from New Zealand, who now head north to Auckland, for a date with South Africa, and they’re just one win away from that first elusive World Cup final, and a date with either Australia or India.

The final four have been decided… the Semi-Finals are upon us, and they’re set to be two blockbusters… we can’t wait.

In the meantime, New Zealand home by 143 at the Westpac Stadium.
Thanks for your company today… you’ve witnessed some cricketing history that won’t be forgotten by anyone who saw it.

The Windies go home… New Zealand roll on, and we look forward to your company from Auckland on Tuesday.

For the moment, from Wellington… it’s goodnight!