Mark Taylor chats to Cricket Australia about the opening Test!

7:30pm AEST | It’s one of Cricket’s great rivalries… the battle for the biggest of small prizes… that famous Urn.

Australia, led by Michael Clarke, come to England on the back of a 2-0 win over the West Indies, and World Cup supremacy in March, looking to win The Ashes on foreign soil, for the first time since 2001.
It’s fair to say, they’ve had a much better lead in to the 2015 series, than they did in 2013!

Just days before that series, the inner sanctum was a mess… A coach was sacked, a new one brought in, and the expectation that a team with that sort of distraction and disruption, could go out and win Cricket’s great prize.

They lost the series 3-0… it was very nearly 4-0, but then, they regrouped, and annihilated England 5-0 in the return series on home soil.

Now, they return to England, minus Ryan Harris, but with some young names keen to make their mark, like David Warner, Mitchell Marsh, Josh Hazlewood, Pat Cummins, Steve Smith, who’s already made his mark, and one young man who’ll prove to be an integral part of this Ashes Series, Mitchell Starc.

Starc has got the nod for an Ashes Guernsey, in a country where the pitches, and the red ball will suit him perfectly.

He’s known for his fast, swing bowling, which has been Australia’s nemesis during the past three Ashes series held on English soil.

As for England, they’re without KP, Trott, Collingwood, who all played a key role in England’s success in those three winning series… KP is a huge loss, but if Cook, Root and Bell fire, England will be dangerous.

Not to mention, Jimmy Anderson and Steven Finn with the ball. As I said, Australia’s nemesis has been swing bowling, and if these two men can use that to their advantage, England have a fighting chance in this series.

Australia start as favourite, but FIVE TESTS is a lot of Cricket… So much can, and will happen in that time, and the drama and intensity, match by the excitement and tension, will be the stuff of cricketing legend… let’s get it started!
For the third time since July, 2013, England and Australia are set to do battle for The Ashes… We’re LIVE for the 1st Test, coming to you from the SWALEC Stadium in Cardiff, Wales, right here on Zak Sports!

Hello everyone, welcome to Cardiff, and welcome to the 1st Investec Ashes Test Match of the 2015 series.

We’ve got five of these, plus a Twenty20, and five ODI’s to take us through to the middle of September… Many late nights ahead of us.
We hope you’ll enjoy the ride.

The news here, off the top, is that England have WON the toss, and Alastair Cook has elected to BAT first!

Some interesting selections there. Mark Wood will play his first Test Match against Australia, as will Adam Lyth.

As for Australia, they’ve gone with Shane Watson and Chris Rogers, which means Shaun and Mitchell Marsh miss out.

Mitchell Starc will play his first test against England, as he, Josh Hazlewood and Mitchell Johnson get ready to fire with the new ball.

7:55pm | Sadly, we’ve had a bit of drizzle here… it’s delayed the Anthem ceremony here, but the atmosphere is electric. The crowd has been entertained by some musical items in the meantime.

8pm | Now the players head onto the arena for the Anthem ceremony… Three anthems today, with the Welsh anthem to be played first. It will  be followed by the Australian and English anthems.

Why choose when you can have both. @WWOS9 #Origin #Ashes #WWOS Will flick to @letour #TDF and @Wimbledon later! pic.twitter.com/fBcwxietQG

Origin updates throughout the night, on our FB Page, HERE

We can now confirm that Play will commence at 8:15pm AEST… Only a 15-minute delay, which we’ll make up at the end of the day.

We’re ready to go. Alastair Cook and Adam Lyth are the batsmen. Mitchell Starc is the bowler, and the all-night sporting marathon is good to go, as we go up to the Commentary Box, and say Hi to Michael Vaughan and Ian Healy!

9:10pm | DRINKS
DRINKS have been taken on the first morning here in Cardiff.
Alastair Cook and Gary Ballance are going along nicely, after England lost Lyth early… 1/42, as David Lloyd and Mark Taylor continue in the commentary box!

BIG SHOUT… GOT HIM, YES!!! MITCHELL STARC GETS HIS FIRST… AUSTRALIA STRIKE TWICE IN 9 BALLS AFTER DRINKS, AND IAN BELL IS ON HIS WAY!

Root joins Ballance, and England are in trouble on the first morning. 3/43, as Ian Healy and Mark Nicholas take over commentary!

Joe Root has started handsomely at number 5.
England 3/55 just inside 30 minutes away from lunch, as Ian Healy is rejoined by Mark Taylor!

England have made it to Lunch just 3 wickets down.
Joe Root has been superb in the last 45 minutes, since he strolled to the wicket… 33 runs in just 24 balls.
Meanwhile, Gary Ballance at the other end, was 17 off 52 after the 22nd over… he raced to 28 off 57, with the five balls he faced in that last over before lunch.

They were 3/43 shortly after drinks, so you would think England would be happy to get to 88 without losing another wicket!

Starc, Lyon and Hazlewood all have a wicket each, and play resumes at 10:40pm AEST!

10:40pm | Hello again from Cardiff, where we’ve had lunch, and are back, ready to go for the afternoon session.
Joe Root and Gary Ballance resume, as Josh Hazlewood gets first crack with the ball after lunch, and calling it for you are Michael Vaughan and Mark Taylor!

There it is… a streak-ish stroke from Joe Root brings up his FIFTY… his 12th in Test Match Cricket!
He’s made it in quick time, but needs to go on with it!

It’s DRINKS on the first afternoon in Cardiff, and Australia are yet to get their man.
They had a shout for LBW against Root earlier, but the umpire gave it not out, which technology proved was the right call, and Australia have lost their first DRS challenge of the series.

Root and Ballance are keeping things steady, and starting to frustrate the Australians. It’s 3/139, after 37 overs… we remind you, that play will be extended at the end of the day, due to the 15 minutes we lost at the beginning!

Players will finish their drinks break, and play will resume in just a moment, as Michael Vaughan and Mark Nicholas take over commentary!

It’s TEA on the first day of the 2015 Investec Ashes Series, and it’s fair to say that England got the better of that session… Root and Ballance are playing superbly!

The Australians have had a couple of chances, but haven’t been able to capitalise.

We’ve got 38 overs coming up in the final session of play, and due to the delay earlier in the day, expect play to continue through until 3:45am AEST… 3:15am is the new scheduled close of play, but as always, that extra half-hour is allocated at the end of the days play is to ensure that all of the 90 overs get bowled.

Gripping contest here… go get yourself a coffee, and rejoin us at 1am for the final session of play!

1:03am | Hello again from the SWALEC Stadium in Cardiff… it’s the first day of the 2015 Ashes Series, and we’ve got a great contest on our hands.

England got the better of the middle session, and Australia desperately need a wicket, to break what is becoming a pretty effective partnership.

Joe Root is on the cusp of a century… just seven runs away, as Players and Umpires resume their positions in the centre, and we go to the commentary box, and say good morning to Mark Taylor and Ian Healy!

GOT HIM!!! ABSOLUTELY PLUMB LBW… HAZLEWOOD HAS STRUCK AFTER TEA… IT’S NOT THE DANGER MAN JOE ROOT, BUT IT IS BALLANCE, AND IT BREAKS THE PARTNERSHIP, AND GIVES THE BOWLERS A CRACK AT THE NEW BATSMAN!!!

Ben Stokes is the new man in for England, and if you recall, he was the find of their miserable summer in Australia 18 months ago!

FINE SHOT… IT’S FOUR, AND IT’S A GREAT HUNDRED FOR JOE ROOT!!!
HIS 7TH TEST MATCH CENTURY… 2ND AGAINST AUSTRALIA, AND SOME BRILLIANT WORK HAS BEEN REWARDED!

Still 22 overs left in the days play, and it’s not looking good for Australia at the moment… Ben Stokes and Joe Root are NOT mucking around in Cardiff… they’ve added 62 runs since they joined up at the crease 13 overs ago.

Shane Watson will bowl the 69th over, as Mark Nicholas and Ian Healy continue in the commentary box!

EDGED, AND GONE!!! ROOT’S FINAL EDGED ONE, AND SHANE WATSON WAS PERFECTLY PLACED TO TAKE THE CATCH!
ROOT WILL GET A STANDING OVATION, FROM THIS PACKED CROWD HERE IN CARDIFF… WHAT A SENSATIONAL INNINGS THAT WAS… A GREAT WAY TO START THE SERIES. 5/280!

Jos Buttler is the new man in, as Michael Vaughan and Ian Healy take over commentary!

BOWLED HIM… ANOTHER ONE FOR STARC… THREE WICKETS NOW FOR THE LEFT-ARMER, AND RYAN STOKES MUST GO, JUST MOMENTS AFTER RAISING THE BAT FOR HIS HALF-CENTURY!

Moeen Ali joins Jos Buttler… two fresh batsmen for the Aussies to bowl at a few overs out from when the new ball is due… a difficult 55 minute period coming up for England, as we move closer to stumps!

3:10am | Australia have taken the new ball. England are 6/319 with about 35 minutes to play before stumps will be called!

3:15am | Mitchell Starc has gone off the field… I dare say we won’t see him bowling again today. Once we know what the issue is, we’ll let you know.

Ian Healy is with Mark Taylor to take you through to STUMPS, as the villain of the 2013 series heads to the crease!

And, that is STUMPS on the first day of this highly-anticipated series… a day that probably belongs to England.
They fought hard after being 3/43, to be 7/343 at STUMPS.

Joe Root was the standout most certainly, but there were brilliant contributions from Ballance and Stokes, before Ali and Buttler made some runs at the back end of the day.

Johnson failed to get a wicket… Josh Hazlewood was the best of the Aussie bowlers, and Mitchell Starc wasn’t far behind him. No one’s entirely sure as to why he left the field

Tomorrow, Australia’s batsmen will get their chance on what is an excellent pitch in Cardiff… but before that, the bowlers have the big job of trying to restrict England to as little as possible… 400 is very achievable for them from here, but Australia will be hoping to bowl them out for less than that, and they’re already into the tail, with Stuart Broad having started his innings just before the close of play.

England, 7/343 at STUMPS… It’s been a marathon night, and now morning of sport… Queensland victorious in the Origin… England on top in Cardiff, and Murray to meet Federer at Wimbledon on Friday… We very much hope you’ve enjoyed it, and we look forward to your company from 7:30pm AEST, when we get stuck into Day 2 of this 1st Test… in the meantime, a very good morning to you! 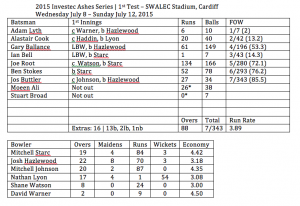