7:30pm | Good evening everybody. Welcome to the SWALEC Stadium in Cardiff, for the second day of this opening Investec Ashes Test between England and Australia.

England got the better of day 1 in the end… 7/343 at stumps, after being 3/43 mid-way through the first session… the Australians will be disappointed they couldn’t go on with what was a very good start, but… that said, 7 wickets down means the job is nearly done, and restricting England to under 400 on this excellent pitch, is still possible!

The big disappointment for Australia, was when Brad Haddin dropped Joe Root very early into his innings… Root made Australia pay.. going on to make a brilliant 134 off 166 balls… clearly the standout of Day 1, and now a danger man in this series.

After play yesterday, Root spoke to the media, saying he feels as though he’s in a good place.

Meanwhile, for the Australians, three wickets each for Mitchell Starc and Josh Hazlewood, and it was Hazlewood who spoke to the Media at the close of play.

Yeah, Hazlewood is right… the Aussies did get better as the day went on, and they’ll be looking to pick up where they left off, when play starts.

Here’s a reminder of where we’re at after Day 1. 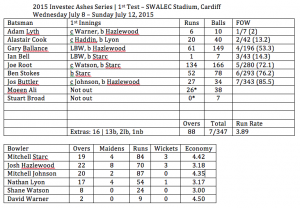 8pm | Hello once again… we’re ready to go at the SWALEC Stadium. The second day of the 1st Test. England resuming at 7/343, and Mitchell Johnson will open the bowling!
Will Australia bat before lunch, and how many can England make from here?
They’re the questions that are about to be answered, as we join Michael Vaughan and Ian Healy in the Commentary Box!

FIFTY for Moeen Ali, and he brings it up with a streaky shot, but it’s a boundary, and good enough for him to reach the milestone.

41 runs in the first 35 minutes, as Ali and Broad look to build this first innings total as high as they can.
Broad survived earlier… Adam Voges took a catch, but didn’t fully have hold of it… it touched the ground surface and Broad was given not out, thanks to technology!

Michael Vaughan has jumped out, as Mark Taylor joins Ian Healy in the commentary box!

GONE!!! WATSON DID WELL TO TAKE THAT CATCH, AND MOEEN ALI’S CONTRIBUTION ENDS ON 77!

ONE WICKET TO GET, AND WE SHOULD SEE AUSTRALIA BATTING BEFORE LUNCH! 9/419

Anderson joins Wood… how much more wag does this tail have in it?

BOWLED HIM… ALL OVER… MITCHELL STARC SHATTERS THE STUMPS, TAKES HIS FIFTH, AND ENGLAND ARE ALL OUT FOR 430. 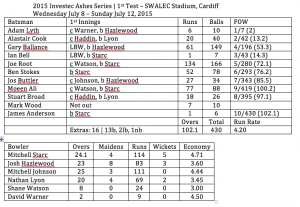 Here’s a look at how it unfolded… brilliant from Joe Root, and Starc and Hazlewood were very good with the ball.

We’ll be back here in a moment, with the start of the Australian innings!

9:23pm | Hello again from Cardiff.
We’re ready to go… a short 35-36 minute period for Chris Rogers and David Warner to see off before the luncheon interval.
James Anderson will bowl to Chris Rogers, who’s never scored a duck in Test Cricket incidentally.
In the Commentary Box ready to go are Ian Healy and Mark Nicholas!

A maiden over from Moeen Ali signals the end of the first session… it’s LUNCH on Day 2. Australia, 0/26 in response to England’s 430.

Chris Rogers has been faster out of the blocks than David Warner, but expect Warner to get stuck in after this lunch break.

Australia trail by 404, as we break for LUNCH on a beautiful day in Cardiff.

10:12pm | LUNCH is being taken here in Wales… Australia 0/26 in response to England’s 430, in a match that’s suiting the batsmen at the moment!
Before the Test got underway, Michael Clarke shared his thoughts on both teams!

10:30pm | Still waiting for the resumption of play here in Cardiff… while we do, it’s a great chance to get an insight into opening the batting. Chris Rogers and David Warner had 9 overs before they headed to the pavilion for lunch… soon, they’ll be back out there to start all over again.

Before the test got underway, an old friend of ours in Samuel Ferris spoke with Chris Rogers about opening the batting!

Great to be with you on this Thursday, as the opening test continues from Cardiff.
David Warner is at the non-strikers end… Chris Rogers will face the first over after lunch. Stuart Broad will bowl it. Michael Vaughan and Mark Taylor will call it!

GOT HIM!!! GOOD CATCH FROM THE SKIPPER, AND JIMMY ANDERSON GETS HIS MAN!

Steve Smith is the new man in, as we rejoin Michael Vaughan and Mark Taylor!

It’s DRINKS in Cardiff… Rogers is approaching 50… Steven Smith has made a slow and steady start, but they are in a better position than England were in the 23rd over of their innings yesterday.

Mark Wood is coming into bowl the first over after drinks, and the two Mark’s, Nicholas and Taylor, will take over commentary!

GONE!!! STEVE SMITH HAS JUST SCOOPED THAT TO ALASTAIR COOK… HE’S BEEN CAUGHT OUT BY A BEAUTY FROM MOEEN ALI, AND THE STAR OF THE AUSTRALIAN SUMMER JUST GONE, IS ON HIS WAY!

The captain enters the arena, for what will be a tricky period up until TEA is taken.

Ian Healy and Mark Nicholas are in the commentary box!

Chris Rogers has 74, and will be looking to build on that, and possible score an Ashes century, on the other side of the TEA interval, and we hope you’ll join us then!

1am | Good morning everybody. Welcome to the final session of play, on this, the 2nd day of the 1st Test in the Ashes of 2015.

It’s a packed house in Cardiff, and they’re witnessing quite the contest between bat and ball, there is no doubt about that.

Already 575 runs scored in the five sessions of play, and there’s probably another 120 on offer in this final session.
38 overs or 150 minutes ahead of us, as we head to the commentary box, and say hi to Ian Healy and Mark Taylor!

GOT HIM!!! THICK EDGE, AND ROGERS FALLS AGONISINGLY SHORT OF A CENTURY… BUTTLER TAKES THE CATCH. ROGERS GOES FOR 95… WOOD GETS HIS FIRST. IT’S 3/180!

Adam Voges is out in the centre now with Michael Clarke… his first innings in an Ashes Test… this will be interesting!

GOT HIM!!! Ali has struck again… he got Steve Smith earlier, and now he’s drawn Michael Clarke into a loose shot, and got him caught and bowled!

OUT!!! JIMMY ANDERSON TAKES THE CATCH… ENGLAND GET ONE JUST BEFORE STUMPS… VOGES, ATTEMPTED TO DRIVE IT, BUT IT MISTIMED IT, AND FOUND ANDERSON, AND NOW HAS TO GO, UNFORTUNATELY FOR AUSTRALIA… IT’S 5/258… THEY TRAIL BY 172.

Nathan Lyon comes in as the night watchman, as we return to Cardiff, where Michael Vaughan and Mark Taylor will guide you through to STUMPS!

STUMPS on the second day in Cardiff… A day that’s been dominated by batsmen, although the Australian batsmen will be disappointed… all five who’ve been dismissed all made starts, and were unable to go on with them.

Here’s a look at the Australian card, as well as the match summary to this point! 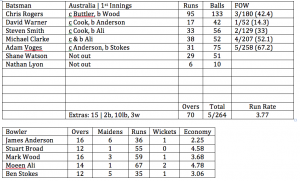 694 runs have been scored over the first two days, and only 15 wickets have fallen

David Warner will be disappointed… he only made 17, and that was even after being given a second chance, with a LBW decision being overturned in his favour.

Mitchell Starc claimed an Ashes 5-for, as both he and Mitchell Johnson racked up a ton in the first innings.

Meanwhile, for England… Jimmy Anderson has been brilliant. Moeen Ali has out-smarted both the Australian Captain and Vice Captain, while Alastair Cook took two cracking catches, and had no sympathy from Joe Root when the crown jewels were smacked by the red Duke.

Even contest at the moment… England have a chance of taking a first innings lead IF they get early wickets on Day 3, but at this stage, you’d have to say that this one will be decided in the final session on Day 5.

Both teams playing well, and it’s making for some quality entertainment on GEM, which would otherwise be showing infomercials, so it’s a win-win situation… just like 2013, you’re getting your moneys worth if you staying up way past your bed time.

Massive weekend of Sport coming up… our focus is the Cricket, and it continues from 7:30pm AEST tonight.

Until then, it’s goodbye!