England’s all-rounder, Ben Stokes, on playing at Lord’s… it is the home of cricket… one of the most sacred of venues in the game worldwide, and for the second time this summer, it’ll play host to Test Match Cricket.

This time, it’s Australia and England, in the 2nd Investec Ashes Test.

England lead 1-0 after a fabulous win in Cardiff on Saturday, and history would suggest that Australia need to win here to keep the series alive.

Australia are set to make two changes according to Fox Sports News… Peter Nevill will debut… he is, of course, replacing Brad Haddin, who is not playing due to personal reasons, and Mitchell Marsh is expected to take the pace of Shane Watson.

Toss is coming up at 7:30pm, with play to start at 8pm AEST. All the action, as it happens, right here!

7:15pm | As we detailed a few moments ago, Brad Haddin won’t play in this Test… Peter Nevill will come in to make his debut.

Haddin is not available due to personal reasons, and we’re thinking of the Haddin family at this time.

Meanwhile, Peter Siddle has hit back at James Anderson, who spoke out during the week!

7:25pm | Toss isn’t too far away… captains will be out in the middle shortly, but while we wait, let’s catch-up with some legends of the game, as they share some of their greatest moments at Lord’s!

7:30pm | BREAKING NEWS from Lord’s… Michael Clarke has won the toss… and Australia will bat first!
England have named an unchanged side for the 2nd Test, unsurprisingly.
Australia on the other hand, as we predicted, make two changes… Mitchell Marsh and Peter Nevill in, Shane Watson and Brad Haddin out!
Clarke has said that Cardiff was the kick up the backside they needed, and they’re ready to go for Lord’s… this is what he said to the Media in the hour after that defeat on Saturday!

7:45pm | Former Australian Captain Steve Waugh was given the task of presenting Peter Nevill with his Baggy Green a short while ago, as we confirm those two teams for you now! 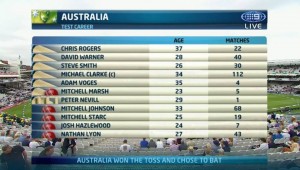 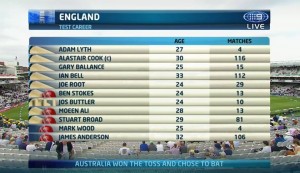 Hello again from Lord’s… we’re ready to go on the first day of the 2nd Test.
David Warner and Chris Rogers have made their way to the middle, and James Anderson is ready with the new ball.
We remind you that Australia have won the toss, and are batting first, in front of a packed house at the Home of Cricket, and waiting for us in the Commentary Box are Shane Warne and Mark Taylor!

Change in the Commentary Box, in come David Lloyd and Ian Healy!

It’s been Australia’s hour here in London… a brilliant start from Warner and Rogers… 0/68 in just 14 overs. The run-rate is fantastic, and the outfield is fast.

Moeen Ali has come into the attack, as Michael Vaughan and Ian Healy take up commentary!

GOT HIM!!! SAFE PAIR OF HANDS, JIMMY ANDERSON, AND THE CHARGE DOWN THE WICKET BACKFIRES FOR DAVID WARNER… A MIS-HIT THAT UNFORTUNATELY FOUND A FIELDER.
MOEEN ALI AGAIN GETS A KEY WICKET, AND AUSTRALIA HAVE LOST THEIR FIRST!

Steve Smith is the new man in, and Michael Vaughan is alongside Shane Warne in the commentary box!

THAT’S IT!!! The first session of the Lord’s Test is complete… Australia are 1/104. The run rate is nearly four an over, and Michael Clarke would be happy with the performance from his men, but David Warner would be very disappointed in the way in which he was dismissed… he threw his wicket away, but Chris Rogers and Steven Smith didn’t allow England to capitalise on that… remaining at the crease right through until Lunch was called!

1/104… Rogers closing in on 50, and Smith settled, with plenty more to do after the luncheon interval.

10:40pm | Hello again from Lord’s. It’s the first day of the second Test, and so far… you’d have to say, despite David Warner’s dismissal, that Australia are in front after 27 overs. It’s 1/104… Chris Rogers has 43 and Steven Smith has 16, and England’s only wicket has come through their part-time spinner in Moeen Ali.

Nice day at Lord’s… bit of cloud around, but so far, the rain has stayed away.

Terrific crowd here for a Thursday… it is SOLD OUT, and we’re ready to get back underway. Stuart Broad will bowl the first over after lunch, and in the Commentary Box are Michael Vaughan and Ian Healy!

Solid, but slow scoring half-hour for Australia… 8 overs for just 22 runs since LUNCH, but at least Rogers and Smith have kept their wicket in tact!

Rogers has passed 50… geez, he’s consistent, isn’t he?
Smith on the other hand, is only just getting started.

These two have put‬ on 48, as Michael Vaughan and Ian Healy continue in the commentary box!

Over rate has been very good from England since the resumption of play. We’ve reached DRINKS in this 2nd session of play, and Australia are still only one wicket down… 151 on the board, and the run-rate is still healthy at 3.51.

Chris Rogers and Steve Smith are settled, and are looking to go on with it, and score big… they’ve certainly got the potential too, and this pitch, albeit slow, is good for batting.

Drinks have been taken. 1/151, as Mark Wood continues, and Ian Healy and Mark Nicholas take over commentary!

Australia’s day so far at Lord’s… they’ve made it to Tea unscathed in that session. 87 runs in the 30 overs, so England have cut back the run-rate somewhat, but these two batsmen are playing smartly… not taking risks… playing the shots when the ball is there to be hit, and not wasting their chance on this pitch at the home of cricket.
It’s a beautiful day in London… the snow is coming down outside our Bathurst office… might go check that out before we come back for the final session at 1am AEST!
Hope you’re enjoying the Ashes on Zak Sports… on our way to the break, England’s coach was adamant that the win in Cardiff had nothing to do with his influence on the England team.
See you in a minute!

1am | We’re ready to go in the final session of play on the first day, as we say good morning, nice to be with you wherever you’re following our coverage… Smith and Rogers resume, and in the commentary box, Brett Lee and Ian Healy!

Chris Rogers has 97 at the moment, as we return to Michael Vaughan and Mark Taylor!

1:48am | GOT IT… STRAIGHT DOWN THE GROUND, AND THE RUN OF UNCONVERTED FIFTIES IS OVER FOR CHRIS ROGERS… HE GETS TO THREE-FIGURES, AND AUSTRALIA ARE DOMINATING THE OPENING DAY AT LORD’S!

CHRIS ROGERS AND STEVEN SMITH HAVE JUST BROKEN AN 85-YEAR OLD RECORD!!!
THE HIGHEST SECOND-WICKET PARTNERSHIP FOR AUSTRALIA IN TEST CRICKET AT LORD’S… 237 PASSES THE MARK SET BY BILL WOODFULL AND SIR DONALD BRADMAN BACK IN 1930, OF 231!

It’s 1/315, as Brett Lee and Mark Taylor take over commentary!

That’ll be STUMPS on the first day of the second test, and it’s well and truly a day that belongs to Australia… no one will question or dispute that, as there is no doubt that England lost today as emphatically as Australia lost in Cardiff!!!

A extraordinary turnaround for Australia, from the agony and despair of Cardiff, to the ecstasy and elation of only being one wicket down at stumps… having your opening and first-drop batsmen undefeated with a century each to their name, and an Australian record partnership for the 2nd wicket at Lord’s to boot, surpassing a mark that stood for 85 years.

1/337 at STUMPS. The only wicket fell when David Warner was dismissed with the score on 78, but since then… Rogers and Smith haven’t looked like getting dismissed… yep, sure… Rogers has edged a couple, but it’s been his lucky day, cause all chances have gone away from fielders or not carried to them!

Great work from England as well… for the first time in this series, all 90 overs were bowled in the days play, which would suggest that the captains may have been warned about the slow rates in Cardiff.

The run-rate was very good at the beginning of the day, but Australia not as fast in scoring their runs as England were in Cardiff… the run-rate today 3.74, but at least they have wickets in the shed, which is something England didn’t have after Day 1 in Cardiff… they were 7 down at STUMPS there, and dismissed before lunch on the second day.

Now, if Australia are to be dismissed before LUNCH tomorrow, it’d be monumental disaster… they’ve set themselves up to go on and make a very, very big first innings score… anything under 500 from this point would be considered a win for England.

Speaking of them, their bowling card… well, what a dismal sight that is… one wicket fell, and it went to the man that Michael Vaughan described as a part-time off-spinner, although I’m sure Moeen Ali would dispute that after claiming 4 big scalps in Cardiff, and David Warner here today.

So, how about that for a day of Cricket… Australian fans will wake up with some renewed faith and hope, that Michael Clarke’s men may be able to win a series on English for the first time since 2001… today has gone a long way to boosting the Australians confidence.

Chris Rogers finally got the monkey off the bat today, and looking at that score now, and looking back to this morning, David Warner will be very disappointed with how he got himself out, because there was certainly a century there for the taking, and he didn’t capitalise.

3:45am | So much more sport still to come your way this weekend.

A plethora of Sport coming your way over the next couple of weeks, but we can’t get enough of it… and we hope you feel the same way.
Trust you’re enjoying the Ashes as much as we’re enjoying bringing it to you.

Australia, dominant today, and they’ll no doubt be keen to go on with it tomorrow, and firmly put themselves in the best possible position to win the match, and level the series in the process.

We very much look forward to your company tonight from 7:30pm AEST, but for now, from us at Lord’s, have a great morning, bye for now!