For the drivers, for the teams, for the fans, the centre of the universe is right here on the third weekend of March… the world of Formula 1 is no bigger than a few hectares, Melbourne’s Albert Park Circuit… and the weather is always a big talking point here in Melbourne, but no issues with it today: fine, sunny, 19 degrees, and it will remain dry for the afternoon, as Formula 1 roars into life for 2015.

Hello everyone, Zak Caban with you. Welcome to Round 1 of the 2015 FIA Formula 1 World Championship, the Rolex Australian Grand Prix from Albert Park.

Well, it’s been a controversial build-up to this race, which is the 20th to be held at Albert Park.

Speaking of Qualifying, Mercedes dominated yet again, just as they did in 2013!
They’ve locked-out the front row… they dominated all the practice sessions, and they look the goods for back-to-back Drivers Constructors World Championships.

Here’s the grid for you:

3:45pm | The drama continues here at Albert Park, with both Kevin Magnussen (Mercedes) and Danii Kvyat coming to a stop on the sighting lap… take Valtteri Bottas out with his injury, and just 15 cars will start the 2015 Australian Grand Prix. 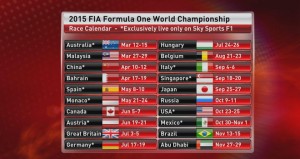 So, here we go… Season 2015. The start of a new era for those of us in Australia, with Fox Sports picking up the rights to the whole Championship, with an unprecedented deal with Sky Sports F1, which will see their unrivalled coverage beamed into Australian households for the next 6 years.

That includes every Practice session, as well as Qualifying and Race coverage from every GP, all LIVE and in High Definition. Fox viewers will also be treated to “The F1 Show”, which is Sky’s magazine show for the F1 World Championship.

The wait is nearly over.

Incidentally, Pirelli have brought the Medium and Soft compound tyres to Melbourne. As has been the case since 2007, drivers must use both the PRIME and OPTION tyres during the Grand Prix.

We’re racing in Melbourne, and Lewis Hamilton makes a brilliant start, to lead his team-mate into turn 1. Vettel was very aggressive in finding his way up to third. Raikkonen goes wide, and there’s contact, and Pastor Maldonado is in the WALL!

Maldonado has the first crash of the season, and the Safety Car is deployed on Lap 1!

Ricciardo makes his way through the carnage, and sits 6th, behind Hamilton, Rosberg, Massa, Vettel and Felipe Nasr, who made a magnificent start.

It was contact between Raikkonen, Nasr and the Lotus of Maldonado.

Maldonado’s team-mate, Romain Grosjean has also retired on Lap 1, which means we’re down to 13, as the Safety Car comes into pit-lane at the end of Lap 3.

Lap 17 | Kimi Raikkonen pits from 7th position, and will rejoin in 11th.

Lap 24 | Good battle unfolding between Ricciardo and Massa, but the Australian pits from 5th, and will change to the medium tyre, and resume!

Lap 26 | Most cars have completed their first pit-stop, and a lot of drivers are opting for a one-stop strategy.

Fairly uneventful Grand Prix so far… the pit-stops appear to be over, with the exception of Nico Rosberg, who is due to complete his second pit-stop soon.

Ricciardo is fighting with Felipe Nasr for 6th position, as Kimi Raikkonen also pits for a second stop… he changes to the Medium tyre for the final run home!

Lap 42 | OH NO… KIMI RAIKKONEN HAS COME TO A HAULT ON THE EXIT OF TURN FOUR… THE ENGINE IS OFF… IT’S A MECHANICAL ISSUE, AND IT’S TERMINAL… KIMI RAIKKONEN’S DAY IS DONE!

Lap 55 | Ericsson gets the job done, and passes Sainz for 8th position in the Australian Grand Prix.

Lap 58 | Such a commanding performance from Mercedes… they’ll finish the race as they started, 1-2… Lewis Hamilton WINS the Australian Grand Prix for the second time… the last time he won here, he won the World Championship, which is a good little omen for him.

Nico Rosberg 2nd, Vettel starts at Ferrari in style with 3rd… then Massa, Nasr and Ricciardo.

What a great result for Felipe Nasr, after all the drama for Sauber this week… for them to get on the track, and hit the ground running is extraordinary… their debutant finishes 5th, and both cars made it into the points, which is fantastic.
The saga will go on behind-the-scenes before we get to Malaysia, but they’ll relax for a little bit tonight, no doubt!

Let’s have a look at the points.

Sebastian Vettel will be delighted with that result… it’s the most competitive he’s looked since winning the Brazilian Grand Prix in 2013. 3rd, on debut for Ferrari, and plenty more to come from the German, that is for sure.

Daniel Ricciardo will be disappointed, and so to will Red Bull… that car appeared to struggle in the back end of the Grand Prix, so much so, that it couldn’t pass the Sauber of Felipe Nasr… so, plenty of work to do at Red Bull, and plenty of work to be done for a lot of other teams after what we saw in Melbourne… Jenson Button was the only driver who finished not to score points… McLaren are nowhere near where they wanted to be, and I’m sure that Fernando Alonso won’t be all that disappointed that he wasn’t out there today, after seeing the struggle that his team endured.

Next round of the series is in a fortnight’s time… we go to Malaysia, with the race from 7pm AEDST on the Sunday Night.

We’ll have a report from that one for you, due to our LIVE coverage of the Cricket World Cup Final.

Speaking of the Cricket World Cup… LIVE coverage of the knockout stage of the tournament begins on Wednesday from 2pm.

So, it’s been an extraordinary week… Manor Marussia, still not on the track after a difficult off-season… Saubergate will continue behind-the-scenes, and a few cars not even able to complete a sighting lap this afternoon, but when the lights went out, it was all Mercedes once more, as we predicted it would be.

Lewis Hamilton wins the Australian Grand Prix for the second time… the last time a pole-sitter won here before today, was Vettel in 2011, and that incidentally, was the last time the driver who won the opening Grand Prix, also won the World Championship, which is exactly what Hamilton did after winning here in 2008, so it’s shaping up nicely for the two-time World Champion in 2015.

From all of us here at the Australian Grand Prix… it’s bye for now!