It’s been a day for Ford here at the UBET Perth Supersprint, and as we gear up for Race 8, it’s our Race 7 winner, who has pole position.

Hello again everyone. Zak Caban here with you, and welcome to our coverage of the second V8 Supercar race of the weekend.

In Breaking News out of the Gold Coast, I can confirm that the Junior Kangaroos have defeated the Junior Kiwis 22-20 in the Test Match at CBUS Super Stadium… the big Test Match between the senior teams of Australia and New Zealand will come your way tomorrow from 4pm AEST on Zak Sports, straight after City/Country from Wagga. We’ll also have MotoGP from Spain, the Queensland 300 from Willowbank, and the 9th Race of the V8 Supercar championship from here at Barbagallo… so, a big day coming up tomorrow.

Let’s turn our focus back to V8 Supercars… Big race coming up here. Jamie Whincup starts second on the grid… a far better effort than what he achieved in Qualy for Race 7. He finished 15th earlier, but he’ll be hoping for a lot higher than that this afternoon.

Fabian Coulthard and Craig Lowndes will share the second row, but they’re all trying to stop Frosty, who starts from where he finished earlier.

Here are the results from Race 7, as well as the grid for Race 8.

Race 2 of the afternoon… Race 8 of the Championship is underway… great start from Whincup, as well as Winterbottom, and it’s Frosty who leads them in to one, and Lowndes has got the jump on Coulthard, and will go third.

Coulthard takes P3 back as we end Lap 1.

Frosty has pulled out… huge margin of 3 seconds to Whincup, Coulthard sits third, then Mostert and Lowndes making up the top five.

Flawless drive from Mark Winterbottom… he’s led from start to finish, and takes the chequered flag… 2 wins for the day, and the first time he’s won two consecutive championship races since 2012.

Whincup bounces back with second, ahead of Coulthard, Mostert, Lowndes, Courtney and Reynolds the top seven.

Good run for Chaz, and Reynolds unlucky not to get by Courtney.
Rick Kelly, Will Davison and Tim Slade made up the top ten.

Disappointing for Shane Van Gisbergen… he finished down in 24th. 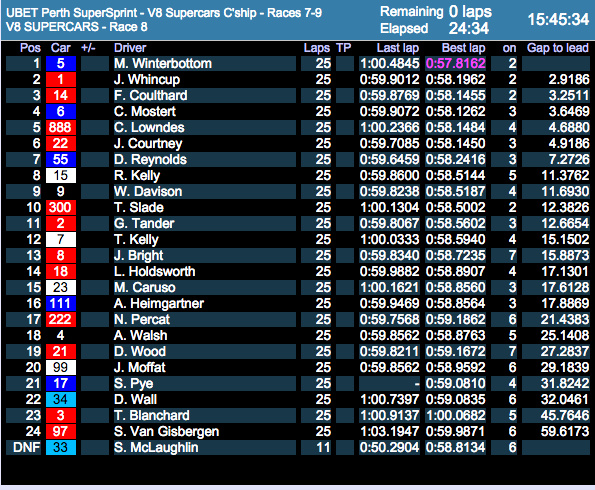 So, two races without a Safety Car interruption today… these sprint races haven’t provided the most exciting racing yet, have they?
But, we’ve got a 200km race to look forward to tomorrow, and strategy will come into play there, which will be great fun for us, and very interesting to see who does what, and how it all plays out.
But, Ford are back in the game… Frosty… two race win, and the championship lead ahead of an 83-Lap race tomorrow.
We hope you’ll join us then!