The teams have made their way across the Nullarbor, to the beautiful city of Perth, and to the sandy surrounds of the unforgiving Barbagallo Raceway, some 35km north of the CBD.

Hello everyone. Zak Caban with you, and welcome to Race 7 of the 37-Race 2015 V8 Supercar Championship.

Well, History could be made this weekend, as Craig Lowndes goes out in search of his 100th win in this series. What an incredible career it has been, and what an achievement, what a moment that would be if he’s able to achieve it across the course of the three races this weekend.

Soft and Hard tyres will be used here in WA.

Let’s have a look at the Championship standings.

You can see that Jamie Whincup leads the way,but only 27 points separate the top five, but there’s only been six races, so don’t read too much into that.

Yesterday, Tim Slade was the fastest driver across the two practice session, but there’s good news for Ford fans after Qualifying, as Chaz Mostert has taken pole for Race 7, and Frosty has taken pole for Race 8… so, the drought of 46 races is over… that’s how long it’s been since a Ford driver, or car had pole position for a V8 Supercar race.

It’s a all Prodrive Racing Australia front row for Race 7. Championship leader Jamie Whincup had a shocking run in Qualy… he’ll start 21st, so it will be difficult for him, as it’s tough to pass at this place… Craig Lowndes will start third, ahead of Garth Tander, Shane Van Gisbergen, and Clipsal winner, James Courtney.

Yesterday’s quick man, Tim Slade will be starting out of position number 10.

Big race coming up… only 60km around here, so it’ll will be a very quick sprint.

Looking forward to it immensely. The race is LIVE, next!

4:18pm | Racing in Perth… 25 Laps, and Frosty has got the jump on his team-mate, and will lead the field into turn 1.
Whincup has started well… moved up to 19th.
Lowndes, Tander, Van Gisbergen and Courtney make up the top six.

Lap 7 | Whincup continues to move his way forward… now sitting 18th… not finding it easy to make up positions.

Lap 8 | OH NO… Garth Tander is in the pits, and out of business. Mechanical failure on the left rear, and his race is done… the team have limited time to get it in the garage, get it repaired and back out there for race 8 a little later on this afternoon!

Lap 11 | After 10 Laps… Winterbottom leads from Mostert, Lowndes, Van Gisbergen and Bright, who has jumped in front of James Courtney.

David Reynolds is the man behind James Courtney, and they’re having a ding-dong battle at the moment.

We’re onto Lap 15… Mostert continues to sit on his team-mates tail… there’s nothing in it right now, and CL isn’t too far away in third position.
Whincup now up into 16th, and we’re seven laps from home!

Big moment for Tim Slade at the end of the main straight… he’s lost a bunch of places. Manages to rejoin in 15th, but loses that position to Jamie Whincup at turn 6.

Reynolds and Davison have both got past James Courtney… he was nearly passed by Coulthard as well,  but has managed to hold his position, and remains 8th in the order.

Final Lap here in Perth… An outstanding result this is for Ford… FIRST WIN OF THE SEASON for Prodrive Racing Australia… Mark Winterbottom takes the chequered flag… victory is his. Chaz Mostert finishes second, and Craig Lowndes rounds out the podium, and inherits the lead in this Championship.

Great result for Ford… they won all the non-championship races at the Australian Formula 1 Grand Prix, but until today, the six championship points paying races were won by Holden.

Here’s the final results from Western Australia for you. 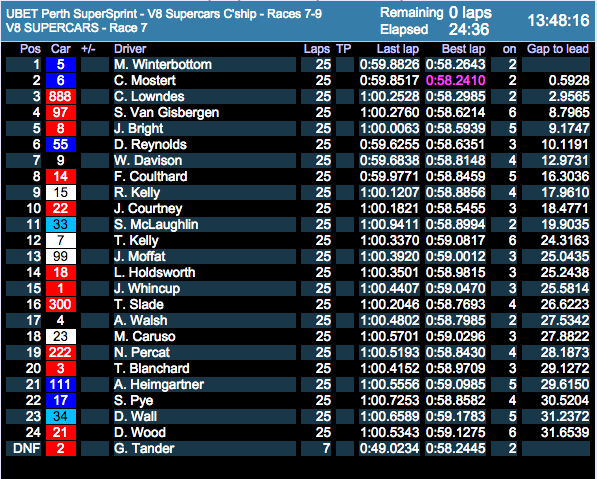 First win for the Fords since Bathurst, when Chaz Mostert stole victory from Jamie Whincup with just five corners to go, in an 8-hour epic.
Plenty still to come on Zak Sports this afternoon… we’ll have coverage of Race 2 a little later on.