Saturday at Barbagallo belonged to Prodrive Racing Australia… and so far, Sunday has as well. We’re gearing up for Race 9 of the Championship. A 200km mini-enduro, with pit-stops, soft and hard tyres, and lots of strategy to play our here over 83 at Barbagallo Raceway in Western Australia.

Hi everyone. Zak Caban with you, and welcome to Race 9 of the V8 Supercar Championship series.

This little 2.42km circuit is the second shortest on the calendar, with Symmons Plains being the shortest… overtaking isn’t easy here, but your best chances are Turns 6. 7 and 1.

Chaz Mostert has pole today, like he did for Race 1 yesterday, and it’s an all Prodrive Racing Australia front row.

Here’s a look at how Race 2 finished yesterday, as well as Qualifying for Race 9.

A major accident for Lee Holdsworth overshadowed Qualifying… a roll over, after going sideways into the gravel at turn six saw the red flags fly, as they did when Fabian Coulthard met the wall on the same corner a few minutes later.

Better Qualifying for Whincup, and Tander, but James Courtney was the big loser… down in 11th spot.
McLaughlin has had a difficult weekend… he’ll start 13th today… it’s been a difficult championship for him so far in 2015.

Calling the action for you, Neil Crompton and Greg Rust!

Lap 1 | Mostert struggles off the line again… Winterbottom leads to turn 1… Tander was trying to force the issue, but in the end, he had to yield, and sat in second, from Whincup, Lowndes and Reynolds.

Lap 4 | Whincup off the road at turn six, and loses a bunch of places… falls back to 24th on the race track.

Lap 9 | Winterbottom the fastest man on circuit so far… Van Gis the big mover… up four spots, and in front of Lowndes 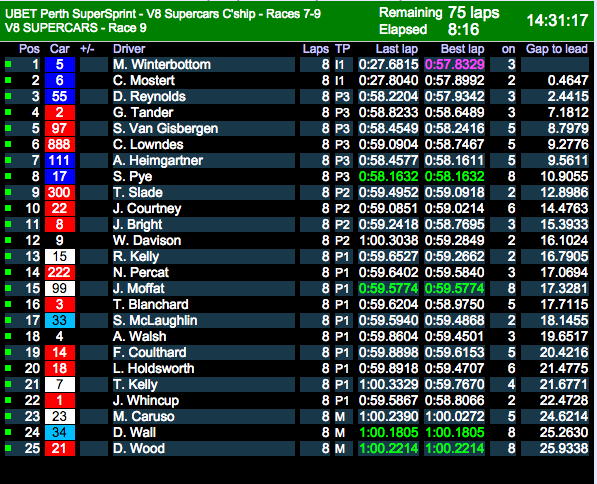 Lap 18 | We’re into the first round of pit-stops at Barbagallo… Green flag running the whole way thus far. Here’s a look at the order, as Andre Heimgartner leads the way… on corrected order, it will be Mostert, who’s managed to leapfrog Winterbottom during the stop! 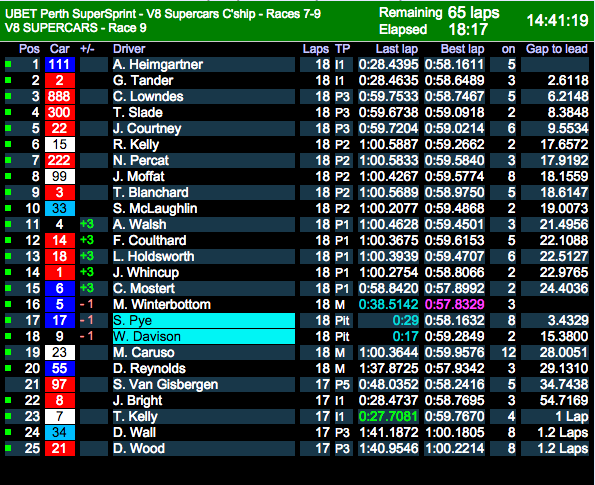 Heimgartner’s now pitted, so all cars who started on the soft tyres have now made their first pit-stop!

Lap 44 | Shane Van Gisbergen is on a 3-stop strategy, according to Greg Murphy, who predicts that the Kiwi flyer will whack some soft tyres on for the run home!

It’s been a fairly uneventful last 10-15 laps here, but Ford remain in control… Prodrive are 1, 2 and 3 at the moment! 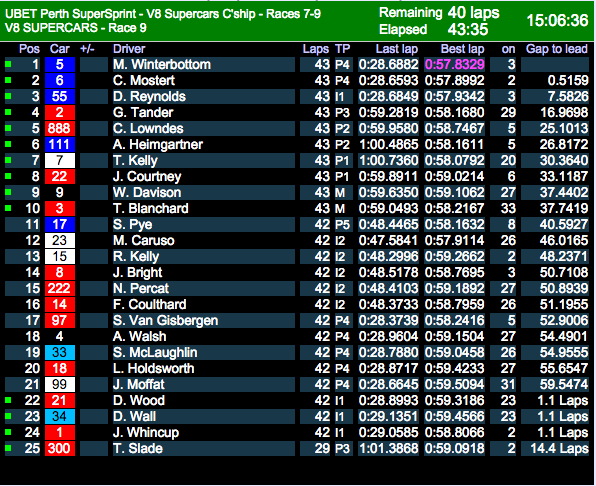 We’ve had our first incident of the Race… Ash Walsh has beached it at turn 6, and he’s triggered the first Safety Car of the Race, and a flurry of pit activity to go with it.
We’ve got 33 laps to run… this is how things stand after the pit-stops unfolded!

More dramas for Tim Slade, as Craig Lowndes continues to lead… just a handful of laps away from his 100th win in the V8 Supercar Championship. 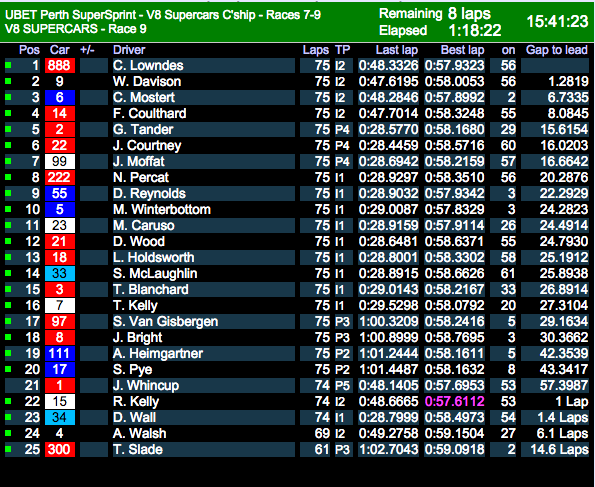 Will Davison… has got passed Craig Lowndes in the final stages, and the strategy has paid dividends for the Erebus Driver… a huge moment in his career, with Victory in Race 9 of the Championship at Barbagallo Raceway in Perth.
Lowndes is second… he misses another chance to take his 100th career win, but there’s always Winton in a fortnight.

Coulthard third, Mostert and Courtney made up the top five… Tander, Moffat, Percat, Reynolds and Caruso make up the ten,  but it’s a great day for Erebus, Betty Klimenko, and Will Davison, who gets his first win since 2013. 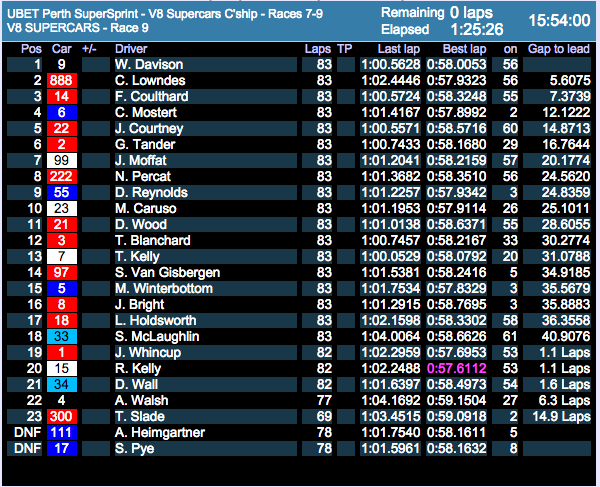 Not a good weekend for Jamie Whincup… he finished 19th today. Frosty will be disappointed with how his weekend finished, and even though he didn’t get the 100th win, Craig Lowndes does have the championship lead as we head to north-eastern Victoria in a fortnight from now.
Difficult weekend again for Scott McLaughlin… gee, Volvo haven’t had much luck to start 2015… can’t catch a break.

Nissan will be happy with two in the top ten, and HRT have continued a positive start to 2015.

18 drivers finished on the lead lap… four manufacturers made it into the top ten (5 Holdens, 2 Fords, 2 Nissans and a Mercedes)

Here’s the Championship standings for you.

Coming into the weekend, Jamie Whincup was the leader, by the time we finished Race 8, it was Winterbottom, and thanks to consistency, Craig Lowndes has now grabbed the Championship lead.

Brilliant day here in Perth. Hope you enjoyed our coverage. Look forward to your company at Winton in a fortnight from now, and for MotoGP a little later this evening… Bye for now!