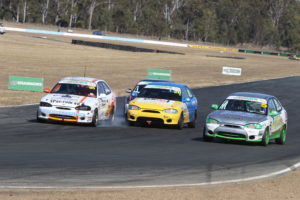 One of the success stories in Australian Motorsport, at a state-level, in recent years, has been the rise of Series X3 – Hyundai Excel racing.

Queensland’s series is no exception – in fact, in the Sunshine State, there are two dedicated series’ for the Korean car.

Once a year, Series X3 Queensland enjoys national exposure, when the teams and drivers venture to Queensland Raceway, to feature on the program of the annual Shannons Nationals meeting staged at the Willowbank venue.

Thirty-two cars were entered for the third round of the 2018 Championship, with drivers coming from New South Wales, South Australia and Western Australia, just to be part of the action.