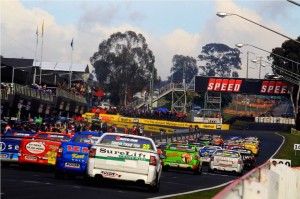 A small change to the on-track schedule, which sees the V8 Utes no longer holding their second race at 8:15am on Sunday morning, means that Fox Sports coverage of the final day from Sydney Olympic Park will now commence at the later time of 8:30am AEDST (previously 8am).

The change comes as a result of the series’ second Friday Morning practice session being removed from the schedule, with Qualifying to be held in its place.

Subsequently, Races 1 and 2 will be run on Saturday, in the slots formerly held by Qualifying and Race 1, while an on-track V8 Utes Ride session will be run on Sunday morning from 8:15am, where Race 2 was originally scheduled.

Fox Sports will deliver over 27 hours of LIVE coverage from the streets of Sydney Olympic Park, and Network TEN will broadcast the V8 Supercar Championship Finale LIVE, with 12 hours of coverage across Saturday and Sunday.