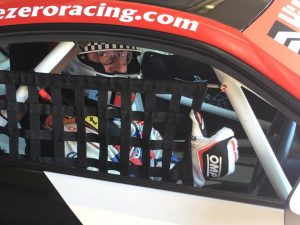 After six hours of racing around the best track in the country, only six seconds separated first and second in Class D. For the team at Triple Zero Racing, the six seconds was in their favour, as they defeated pre-race favourites Jimmy Vernon and Mark Caine, to take out class honours in the 2017 Hi-Tec Oils Bathurst 6 Hour.

For Reeves, it’s back-to-back victories on Mount Panorama, while for Sutton, it’s the icing on the cake of his mountain debut.

All weekend long, the Toyota 86 ran second or lower, in Practice and Qualifying, behind Vernon and Caine, but the team remained confident that they could walk away with victory, and did just that. 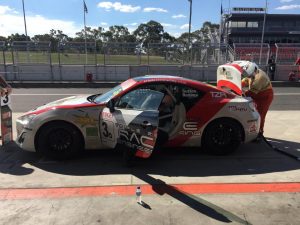 Reeves started the race, and with three compulsory pit-stops, the plan was for both Reeves and Sutton to do two stints, Reeves the first and third, leaving Sutton with the second stint, and the responsibility of bringing the car home.

The team had a plan, and they stuck to it. Reeves spoke all week about the end game, that run to the chequered flag in the last hour.

Reeves, as he did last year, played it safe in the opening laps. He said on Friday that “you can’t win a 6 Hour race in the first three laps, but you can certainly lose it”, so he let the field go, as he settled into a groove for the opening stint. 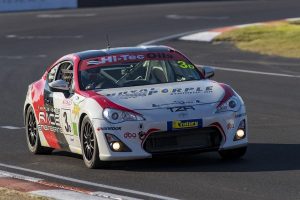 During that stint, he held the lead momentarily, before Jimmy Vernon made his way past in the Shockwave Signs Motorsport 86. Reeves was content to let him go, explaining later that there was no need to fight for position that early, and he would be prepared to take the fight to his rivals come the final hour.

Once the Safety Car was called upon the first time, it would play a major role throughout the course of the afternoon. It made no less than eleven appearances in the 2017 Hi-Tec Oils Bathurst 6 Hour, and it would prove to be good luck for Reeves and Sutton. 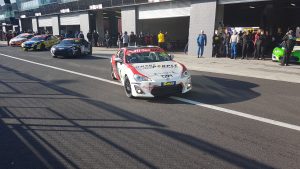 Reeves completed his first stint, and handed driving duties over to Sutton, who had an exceptional opening stint. He maintained pace and position, to still be second in class, when he pitted to hand the car back over to the two-time NSW Production Touring Car Champion.

With the Safety Car leading more laps in the race than any other car, its frequent visits to the race track helped quite a few cars, Reeves and Sutton included, stay on the lead lap of the motor race – it wasn’t until the end of the fourth hour that the #3 would go down a lap, but by that point, they were still sitting inside the top twenty, and second in class. 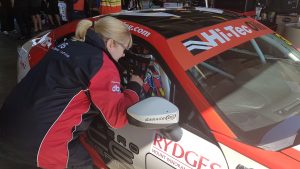 A long green-flag run saw the field spread out, and also saw the Vernon/Caine Shockwave Signs Motorsport entry forced to complete a scheduled pit-stop under green flag conditions, which would turn out to be a defining moment in the motor race.

Shortly after Mark Caine took over from Jimmy Vernon, Reeves and Sutton caught the lucky break of the tenth Safety Car of the afternoon, allowing Reeves to head for pit-road, hand over to Sutton, who would return to the circuit as the Class D leader, and with a healthy buffer over their nearest rivals. 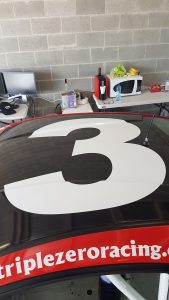 Sutton enjoyed an advantage of more than 90 seconds over Caine, and could therefore cruise to the chequered flag running consistent lap times, and avoiding risk, HOWEVER, a late race Safety Car saw the pressure mount, with Caine catching the break this time, and joining the back of the long queue of cars, to sit just fifteen seconds away from Sutton as the race resumed for the eleventh and final time.

Just eleven minutes, five laps of racing remained at the time of the restart, with plenty of cars between Sutton and Caine, with the fight for Class D supremacy well and truly on.

For Reeves and Sutton, time was on their side, with Caine unable to track them down, and for the second year in a row, Triple Zero Racing took class honours in the Hi-Tec Oils Bathurst 6 Hour at Mount Panorama.

For Reeves, consistency and experience were the keys to success, but post-race he hailed a magnificent team effort, and a marvellous debut for his co-driver, Chris Sutton.

For Sutton, the Mountain experience left him keen for more endurance racing, and more Production Car racing more to the point. 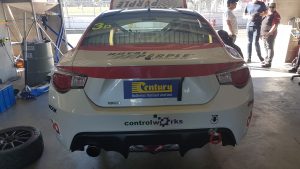 Chris Reeves spoke with our own Zak Caban post-race, and stated that the car would soon be on the market, and he wouldn’t be contesting the full NSW Production Touring Car Championship season, as he would be taking time out to look to the future, with no hint as to what car he might turn up in for the start of the 2018 season.

He also hailed the success of the pair he defeated in the race for victory, quite proud of the fact that the car Jimmy Vernon and Mark Caine drove to second, was formerly from the Triple Zero Racing stable.

While this success signals the end of a very successful era for Reeves and his Toyota 86, it’s also the beginning of a new chapter, because no matter what car Reeves rocks up to Round 1 of 2018 with in his trailer, there’s no doubt it’ll live up to the hype, as we’re already eager to see what the former champion has in store.

VIDEO: Our own Zak Caban spoke with the winning pair LIVE on our Zak Motorsport Facebook page shortly after the race concluded.