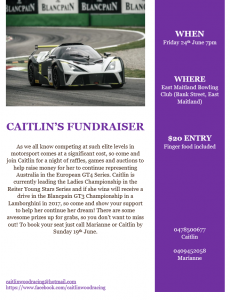 Two things feature prominently in Motorsport – talented drivers and money, but without the cash, it’s often a struggle to fulfill your dreams within the sport.

Too often, we see talented drivers restricted on where and when they can race due to finances, and Caitlin Wood is just one in a long list of drivers who has that exact problem.

Wood has ventured to Europe to try and make a name for herself on the international stage, but is coming back to Australia in order to seek the support she needs to complete the 2016 season.

This Friday Night, Wood will host a fundraiser at the East Maitland Bowling Club in the Hunter Valley, where it is hoped she will receive enough backing and support, to head back overseas and continue racing for the remainder of the season. 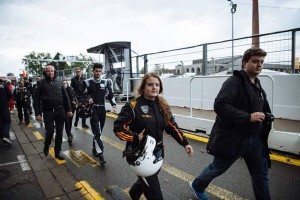 Wood is representing Australia in that series, and if she’s able to win the Ladies Championship, a Lamborghini drive in the Blancpain GT Series awaits in 2017.

Plenty of friends, supporters and sponsors of Wood’s have made tonight possible, by donating prizes that will be up for auction, given away as part of a raffle, or just up for sale. 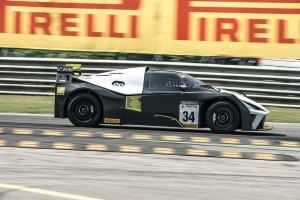 Another 15 prizes are up for grabs in the raffle for those in attendance.

Plenty of great prizes are there for the taking in the auction as well – highest bidder wins.

Our friends at Anglo Australian Motorsport have kindly donated some 2-seater Formula Ford Hotlaps of Sydney Motorsport Park – Wood will drive the winner around the 3.9km circuit.

Other prizes includes plenty of framed merchandise, including:
* Limited edition signed Peter Brock ‘King of the Mountain’ – including a photo of all nine of Brock’s Bathurst winning cars, as well as the last photos of Brocky behind the wheel of a V8 Supercars (Bathurst 2004)
* Signed Australian Cricket team photo after winning the 2013/14 ashes
* South Sydney Rabbitohs 2014 Premiership winning team
* Framed, signed collage of my career (we thought it would be nice haha)

Those in attendance will be treated to a rolling video of highlights from Caitlin’s career so far, including her recent outing at the Pau Circuit in France.

The evening will start at 7pm, and conclude around 10:30pm, and Zak Sports’ own Zak Caban will serve as compare.

Wood’s next outing in her KTM GT4 comes in a fortnight’s time at the famed Spa Francorchamps Circuit in Belgium, and she will fly out on Sunday to prepare for that event, starting with a test at the 7km circuit next week.

Recently, Wood spoke with NBN Television about her European adventures and what’s ahead – view the story, HERE.