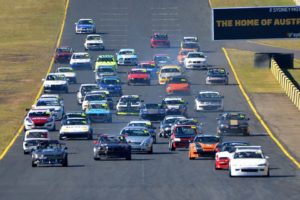 The 300’s have become must-do events on the Motorsport calendar over the last decade – whether they’ve been staged at Wakefield Park, Winton Motor Raceway, Phillip Island, Queensland Raceway or Lakeside Park, these races have established themselves as the pinnacle events of the club-level season, and now the fun of the fair is coming to Western Sydney.

This weekend, Sydney Motorsport Park becomes the sixth different venue to host a ‘300’ since 2008, and this inaugural Sydney 300 will be the 30th ‘300’ to be staged in that time.

Forty (40) entries have been received for the first running of the Sydney 300, with no less than nine (9) different manufacturers represented on the grid – five of which have at least one outright win to their name in past 300s.

Of the manufacturers in this field, not only has BMW enjoyed the most success in past 300s (Five Wins), they also field the most entries in this weekend’s race (10).

Mazda, Nissan and Honda are also well represented, while Mitsubishi and Lotus entries will be outright contenders. 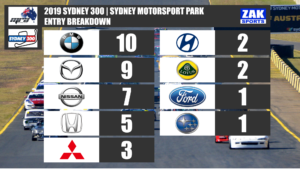 BMW’s hopes for outright honours will lay with the Targa Racing Z3M of Justin Ruggier and Mark Mackay.

Fresh off his triumph in the opening round of the Aussie Racing Car series, at the Superloop Adelaide 500, Ruggier heads to Sydney, where he’ll team-up with Mark Mackay, in a bid to repeat the success the duo enjoyed in the 2014 Australian Endurance Championship.
In that season, Ruggier not only won the 3-race ‘300’ series (on points), but also claimed the Kumho V8 Touring Car Series as well.

Together, Mackay and Ruggier will look to give Targa Racing their third ‘300’ win, after Adam Dodd and Nick Leontsinis won the 2016 Lakeside 300, and Chris Gough and Brian Anderson teamed up to
win the 2018 Phillip Island 300 – both in the Z3M.

A pair that normally team up for the endurance races, David Kruza and Daniel Kapetanovic, are again lining up this weekend, in a BMW 328, while David Bailey returns in his E36 318, but alongside Anthony Soole this time around, after Matt Thewlis was forced to withdraw due to illness.

Elsewhere, the 2017 NSW Production Touring Car Championship Club Champion, Adam Gosling, will partner Nick Cox, in Gosling’s regular season drive, the E46 M3, while Julian Burke and Mattias Herberstein will drive the only other Z3M entered in the race.

Lotus has two entries on this grid, and while it is a manufacturer that has tasted success in the past, the issue of mechanical reliability has always been raised, when discussing their outright chances, but there is no questioning their outright speed.

This weekend, Glenn Townsend teams up with Arthur Magaitis in the Elise, while the Exige in the field will be driven by Valery Muzman, Stephen Wan and Justin Levis.

The NSW APRA and Series X3 championships are both in action this weekend, on a bumper support program for the Sydney 300, and there’s no shortage of Pulsars or Excels lining up for Sunday’s race – leaving a few cars and drivers juggling double-duty this weekend.

David and Scott Williams will share one Excel, Glenn Mitchell and Adam Brook the other.

The Pulsar brigade will be spearheaded by the entries of Craig Thornton and Jordan Cox, plus Troy Derwent and Troy Harrison.

Jordan Cox needs no introduction, but we’ll give him one anyway. He’s been a prominent feature in Improved Production over the years, in his Honda Civic, came so close to winning the Hi-Tec Oils Bathurst 6 Hour last Easter, and returns to Sydney Motorsport Park just days after competing in the Australian Production Car Series season opener last weekend.

He teams up with Craig Thornton – an extremely fast and competitive driver, who hasn’t always had the greatest of luck, when competing in the NSW APRA Series, but will be hoping for a change of fortune over 300kms on Sunday afternoon.

Troy Derwent and Troy Harrison are the other entry to watch – Harrison is a twenty-year veteran of the sport, having competed in everything from Supersprints to circuit racing, in a range of different categories over the years, and Derwent has spent the bulk of recent years competing in Super TT.

There are six Pulsars in this field, including the only female lining up in the race, Brianna Wilson, who’s driving with Nathan Stephens on Sunday afternoon.

Expect the Pulsars and Excels to feature prominently within Divisions 4 and 5.

Honda has a strong representation in this 40-car field, with five entries – including the most-capped ‘300’ competitor in Parry Anastakis.

While more commonly associated with Peugeot, Anastakis will be driving a Honda Civic this weekend, and teaming up with Jimmy Tran to do so.

Anastakis has finished thirteen of the fourteen 300’s he’s contested so far, and will be looking to maintain that strike rate this weekend, with hopes of improving his best overall result in the process – Anastakis has been a ‘300’ outright runner-up on two previous occasions.

Pulsar Series regulars, Ben Hanrahan and Charlie Viola, will pilot one of two Honda Integra’s in the field this weekend – the other to be steered by Benny Tran and Matt Longhurst.

Elsewhere, there’ll be THREE Mitsubishi Evo’s lining up this weekend, and in two of those, it’s a family affair – Martin and Lachlan Higgins will share the drive in the #150 Evo IX, while Gerry and Leigh Burges are teaming up in their Evo V.
Ed Kreamer and Stephen Thompson will steer a Evo IX as well.

With thirty-three degrees the expected top on race day, all eyes will be on the turbo entries, to see how they handle the heat – the weather could be a factor that helps determine the outcome of this race.

While Subaru has never won a ‘300’ before, Brian Rusten and Tyler Mechlem will be hoping to change that statistic this weekend. Their STi is the only Subaru in the 40-car field.

Wherever there’s a ‘300’ being staged, you can guarantee that there’s a swag of Mazda MX5s lining up, and this weekend is no exception, with no less than six entered for Sunday’s race.

Timothy Janke – a regular in Queensland’s GLT Hendrickson Series – for Mazda MX5 and Toyota 86 vehicles – makes the trek down to Sydney Motorsport Park, to partner James Hay.
There are three Herring’s on the grid as well – Tim and Richard will drive one MX5, while Todd teams up with Andy Harris in their second entry.

Michael Hall and Daniel Deckers are veterans when it comes to the ‘300’, and they’ll team up in the #75 on Sunday afternoon.

Outside of the MX5 brigade, there are a further two Mazda entries in this race – David Loftus and Phil Armour in the RX8, and Brendan Scotter and Greg Boyle in the RX7.

While there are no Holden entries, there is just ONE Ford lining up in Sunday’s ‘300’ – the Falcon AU XR6 of Laurel Ball, Michael Rose and Damian Sullivan. Ford is the ninth and final manufacturer in the Sydney 300 field.

Like the Wakefield 300, the class/division structure for the Sydney 300 will be based on lap speed, not car specifications.
After Saturday afternoon Qualifying, the field will be split into five different divisions for the 77-lap race.

Statistically, winning these races from Division 1 isn’t easy, but it has been done – 8 times, as a matter of fact, over the last 11 years.

While it is quite hard to present a form guide for an event that’s never been staged before, you only have to look at the history of the race, at other venues, to see that Division 2 entries will be competing for outright honours.

Of course, like most endurance races, strategy will come into play, as will lapped traffic, and the potential for safety cars. How regularly we see the Safety Car on Sunday isn’t yet known, but it’s presence, and the timing there of, could be what keeps Division 1 cars in contention for outright honours, or what rules them out altogether.

Those ingredients provide us with a perfect recipe, for what promises to be a fascinating race.

Outside of the ‘300’, the supporting cast is fantastic. Throughout the weekend, you’ll see action from the Alfa Veloce Series, a one-hour endure for NSW Superkarts, plus all the action from the latest round of the 2019 APRA NSW Series, and the Series X3 NSW Championship as well. 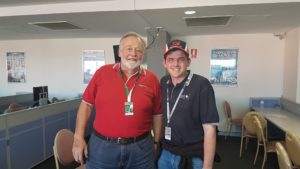 Upstairs, Zak Caban will call all the action this weekend – this will be his 11th ‘300’ – and, on Sunday, he’ll be joined in the commentary box by a veteran of this game, in Will Hagon.

Hagon has been a prominent motorsport commentator and journalist for over 50 years, covering the Bathurst 1000, for the Seven Network, from 1965-1975, the Bathurst 12 Hour for Network TEN, between 1991 and 1994, Wayne Gardner’s winning 1987 World Motorcycle Championship campaign for SBS, and nearly 40 years of work at the ABC, across Television and Radio… and that’s just scratching the surface.

On-track action commences with unofficial practice on Friday, ahead of two 30-minute timed practice sessions on Saturday morning, before the 3-part qualifying on Saturday afternoon.

On Sunday, competitors will have a 15-minute warm-up, for that final systems check, before the 77-lap (300.685km) race commences early Sunday afternoon.
Spectator Admission is $10 each day.