Triple Zero Motorsport finish Day 1 fourth in class, but have their eyes firmly on Sunday’s race.

It was a constructive day at the office for the Triple Zero Racing pair of Chris Reeves and Chris Sutton, finishing with the fourth fastest time in Class D after the opening practice sessions for Sunday’s Hi-Tec Oils Bathurst 6 Hour.

Reeves, the defending Class D winner, has a new co-driver for 2017 in Chris Sutton, who comes on board following Mark Caine’s move to Shockwave Signs Motorsport, where he’ll race with Jimmy Vernon this weekend.

Chris Sutton’s motor racing history has mostly been on two-wheels, but he’s a convert now, making his Mountain debut this weekend. 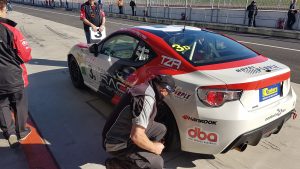 While he has competed in Supersprints in the past, opening practice was his first chance to lap the entire 6.213km circuit at race speed.

Sadly for Reeves, opening practice proved to be frustrating. In his words, he “couldn’t get a lap in”, with 65 cars taking to the track for practice, it was a busier track than usual, which made it difficult for much of the field to get a clean run around Mount Panorama.

After a stoppage to retrieve the stranded Mercedes of Garth Walden and Craig Baird, Reeves returned to the circuit, but was back on pit-road soon after, to hand the car over to Sutton. 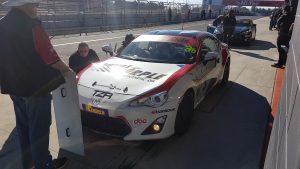 Upon arrival back in pit-lane, he had clocked the car’s fastest lap of the session – a 2:47.974, which gave the pair 56th outright and 9th in Class D.

When asked about his first on-track experience at the Hi-Tec Oils 6 Hour, Sutton simply said “That was different!”.

As you would imagine, he was still trying to get his head around the whole setup – “new car, new track, new everything”, but was confident that the car would have the pace to run with the front running cars in the class come Sunday’s Race.

Like Reeves, Sutton had his fair share of issues with traffic – saying he spent just as much time looking through the windscreen as he did the rear-vision mirror, being weary of the quicker cars coming through, such as the Mercedes’, Mitsubishi’s and BMW’s. 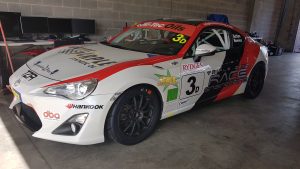 Practice 2 proved much more positive for the Triple Zero Racing machine, as they moved up to 4th in class, and 45th outright.

Reeves took to the circuit first, and managed to clock a very respectable 2:43.495. – finally finding some clear space on the very congested track.

Almost a third of the session was lost when the session was stopped, due to the Mitsubishi Evo of Aaron McGill finding the wall in the dipper.
Upon resumption, Chris Sutton jumped back behind the wheel, and throughout his 20-minute run, was able to improve on his previous lap time by seven-tenths of a second.

After the session, Sutton said he didn’t think the track time lost, due to the stoppages, had affected his race preparation. He used the time sitting on pit-road to think of race lines, braking markers and passing opportunities, and said the only downside of sitting there was that it was getting quite hot inside the cockpit.

The Shockwave Signs Motorsport entry of Jimmy Vernon and Mark Caine remains the car to catch in Class D. They were fastest on Day 1, with a 2:42.013.

When asked after Practice which of the Class D competitors posed a threat to his chances of going back-to-back in Class D, Reeves simply said “Everyone in Class D.”

Reeves is quietly confident that they’ve got a bit up their sleeve for qualifying tomorow, and will approach the race the same way he did in 2016, by letting everyone go at the start, as this is not a race won in the first hour – it can certainly be lost in the first hour, and that plan worked for them last year, when Reeves and Mark Caine secured 10th outright, and the class win. 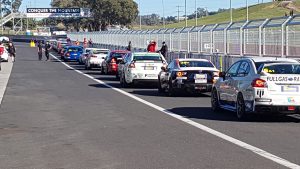 Further adding to the traffic discussion; when speaking about working around the difficulty of having faster cars coming through to pass them, while they’re also passing cars slower than themselves, Reeves had this to say.

“When you’re in a class car, it’s really important to have a plan to let the faster cars through. They’re going to come past, you know it. The trick to it is, seeing them coming, know where they’re going to find you, having a plan to let them pass, get the transaction done quickly, and get on with the job of driving, but you can’t be looking in the rear-vision mirror all the time, or it’s not going to work out well.”

The 2017 Hi-Tec Oils Bathurst 6 Hour continues tomorrow morning with Practice 3 at 7:40am AEST, before Qualifying tomorrow afternoon. Reeves and Sutton will complete their qualifying run in the Bottom 50% session at 12:50pm AEST.