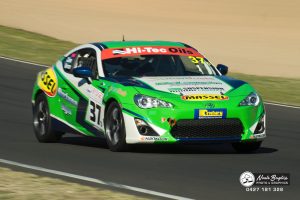 The discussion in the garage prior to practice was about which driver would qualify. The head of the operation, John Vernon, said that the driver with the fastest time after practice would go onto qualify the car later in the day.

On the opening day, Mark Caine was the faster driver, but in the early moments of day 2, Vernon restored order, with a blistering lap of 2:39.609.

It was a time that stunned most of the garage. Caine and Vernon both believed that a 2:41 was achievable given their time from Friday, so they were understandably delighted to punch out a 2:39. 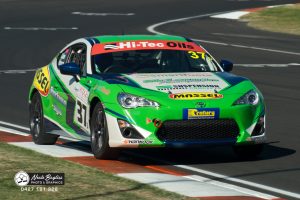 Vernon spent the opening day getting familiar with the track in this Toyota 86 GTS, which is having its first run on Mount Panorama this weekend, and with that time, he proved that he was not only comfortable, but well and truly up to speed.

The scary thought for the opposition to ponder come qualifying, was that the time posted by Vernon in the interrupted morning practice, came on old tyres.

With his exceptional time in Practice, Vernon was given the honour of qualifying the car for Sunday’s race. 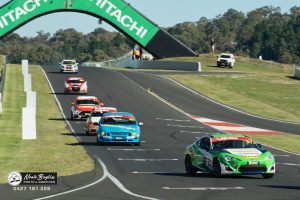 The plan for the 30-minute session was simple – get out, bank a lap and then save the car for Sunday.

Vernon was confident that the car had a 2:38 in it, but that didn’t eventuate, as the 2016 MoComm Cup champion got caught behind Bathurst local Blake Aubin on his flying lap.

Vernon spent the rest of the session calculating his transit time from pit-entry to pit-exit, and the rest of the afternoon watching his team undertake pit-stop practice. 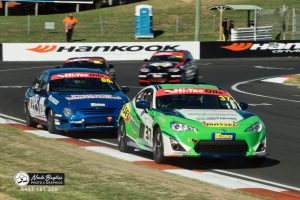 Mark Caine had very little time in the car on Day 2. The 43-year old drove the opening laps of practice 3, and no more. He managed to clock a 2:45.749 on his only flying lap, but remains happy with the car, and chomping at the bit to get behind the wheel tomorrow.

While they’ll start as favourites in Class D, the pair consider the Triple Zero Racing Toyota 86 of Chris Reeves and Chris Sutton as key competition in the battle for class honours, and are confident that they can maintain a fast race pace across the 6 Hours. While it won’t be the 2:39’s we saw today, they’re hopeful of consistent 2:41’s and 2:42’s across the course of the day. 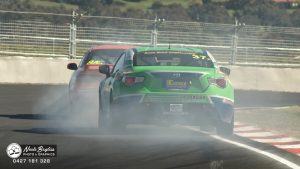