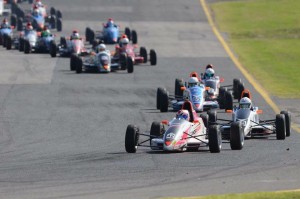 Lachlan Gibbons (Duratec) and Simon Hodges (Kent) remain the men to beat in the NSW Formula Ford Championship, as the series returns to Sydney to start the final third of the season.

This is round 5, and at the completion of Round 6 at Wakefield Park on August 21, the 2016 champions will be crowned.

Lachlan Gibbons has dominated the three stand-alone rounds in 2016 – winning eight of those nine races, but a costly retirement in the opening race of the second round at Sydney Motorsport Park means that Jett Bennett and Jake Donaldson are still within a chance of winning the series in their debut season. 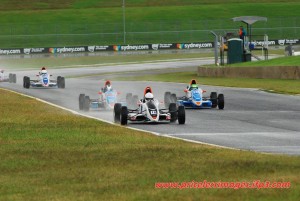 The young drivers have both greatly improved as the season has progressed, closing the gap to Gibbons along the way – the margin between Gibbons, Donaldson and Bennett in both Qualifying and Racing is far smaller than it was in the opening rounds of the championship.

Their championship aspirations have received a massive boost this weekend, with Lachlan Gibbons missing the round, due to his commitments in the national series at Queensland Raceway. The absence of Gibbons gives Bennett and Donaldson a FREE KICK, to try and close the gap, maybe even pass Gibbons in the points race, ahead of the August 20-21 finale in Goulburn, but again, any slip-ups or retirements will be costly, but if they can take a maximum points haul from this round, it’s Gibbons who’ll have his work cut out for him at Wakefield Park.

The Kent series race has held our attention from first until last in 2016, and we expect nothing different from the final six races of the season.

The battle between the Anglo Australian Motorsport team-mates has been extraordinary. It started with Simon Hodges against Daniel Holihan, but the star of the last two rounds has been Aaron Grech. Grech’s undefeated run in the last round at Wakefield Park continued on from his winning form at Sydney Motorsport Park, where he was the first Kent series car home in Races 2 and 3, in a round that double as Round 2 of the Australian series. 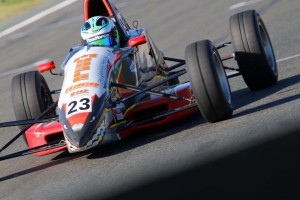 Grech, like Bennett and Donaldson, is in his debut season,  and is within striking distance of Simon Hodges with six races to go. Hodges had a rough run in race 1 of the previous round at Wakefield Park – an off-track excursion left doubt as to whether he would finish race one, but with the knowledge that every point counts, Hodges limped home in 8th place, as Grech continued to close the gap.

Social media socialite Daniel Holihan has had ups and downs throughout this season. His race pace was promising early on, before an off-round at Sydney Motorsport Park left Holihan citing personal exhaustion. It’s been a busy year for the Sydney driver, but he returns to Sydney determined to score big in the final two rounds of the season. 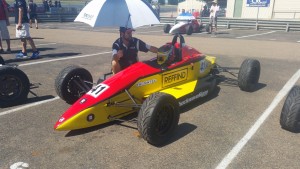 Jason Liddell and Mark Lowing are drivers who’ve stepped up this season, and challenged the Anglo squad, and both are determined to upset the teams ambitions of a 1-2-3 in the championship.

A fascinating final two rounds ahead of us, and it starts with Qualifying later this morning in Sydney, before race 1 takes place late this afternoon.