After a strong weekend at Sandown, Daniel Holihan returns to his home state of New South Wales this weekend, for the third round of his New South Wales series campaign at Sydney Motorsport Park.

This round of the state series doubles as a round of the National Formula Ford Series – the first of two events the series will have alongside their New South Wales counterparts in 2016. They’ll also be at Wakefield Park in August.

A 26-car field will greet the starter this weekend, with Holihan set to resume his state championship duel with Anglo-Australian Motorsport team-mate, Simon Hodges.

Last weekend, Daniel was south of the border, racing at Sandown in the Victorian series, and he has described that experience as some of the best racing he’s been involved in.

When speaking to Zak Sports at Sydney Motorsport Park, Holihan said he had only himself to blame for missing the podium.

A small mistake, which resulted in an off-track excursion saw Holihan relegated towards the back of the field. Thankfully, a mid-race Safety Car gave him a second chance – and he didn’t waste it, quickly moving his way through the field to finish 6th.

He missed the podium by just 6 points. The round was won by Cade Southall.

Holihan had terrific pace at Sandown, and despite missing the podium, he left Victoria with great confidence about that championship going forward – confidence that will motivate him this weekend in Sydney. 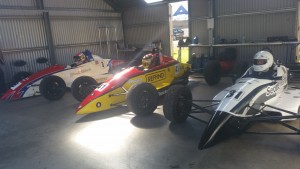 Holihan will not only battle Simon Hodges for victory, but he’ll also be u against the national competitors too, and this will be a tremendous opportunity for the Sydney driver to see how he matches up against those at national level – he’ll get a true indication of how competitive he could be, as he looks to continue his undefeated run of six podium finishes so far in 2016 in the state series.

Qualifying is crucial – that will take place early on Saturday morning, with three races to follow across the weekend.