This weekend marks the first interstate racing of season 2016 for Daniel Holihan, who is off to Phillip Island in Victoria for the 27th Annual Classic Festival of Motorsport.

Holihan is one of no less than 54 drivers taking to the circuit in the Formula Ford category, in a meeting that’s attracted over 500 entries across 12 different categories. 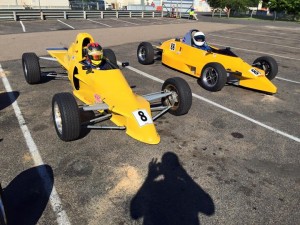 Last time out, Holihan put together a string of podium finishes in the opening round of the NSW Formula Ford Championship at Wakefield Park. It was the second consecutive weekend at the Goulburn venue – the first trip was his first outing in his Historic Formula Ford racer for 2016, which is the car he’ll run at Phillip Island this weekend.

Holihan acknowledges that this Historic meeting may be a bit more challenging than the last, given the size of the field, but seemed excited by that challenge when he shared his thoughts on social media.

“The difference is that it was 14 car field last time, and this weekend is a whole different kettle of fish, with it being a 54 car field. More cars are in the firing line for the Swift DB1 for its second outing. More cars, more action, more passing and battling equals more fun. Bring it on!!

Qualifying and race 1 occur Friday, with Racing to continue across the weekend.