For the final time in 2016, the NSW Motor Racing Championships made the short drive down the highway to Goulburn’s Wakefield Park.

After a splendid Friday, Saturday dawned wet and cold, with a top temperature  of eight degrees.

For eight hours, drivers would experience all four seasons in one day, as the weather constantly changed from dry to wet, cloudy to sunny – there was even some wind and the tiniest bit of sleet across the course of the morning.

Just as the paddock was getting ready for Qualifying, Wakefield Park went into meltdown – it was pandemonium at the circuit as the power went out right across the facility, due to a fallen tree up the road, that unfortunately took out a power line on its way down.

The event was on hold for roughly fifty minutes, but thankfully only the scheduled lunch break was cut from the program, and racing resumed after power was returned to the circuit – with no racing laps or Qualifying time lost from the program. 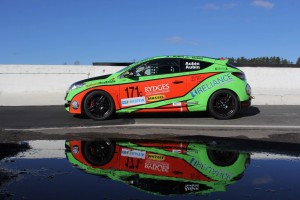 It’s the final sprint round for the V8 Superlaps Production Touring Cars Championship, and with no Dylan Thomas or Greg Symes, Daniel Oosthuizen was expected to start a resounding favourite, but the late entry of Garth Walden’s Mercedes A45 AMG left us hopeful of a duel between the pair.

Sadly for Walden, Oosthuizen just had too much power – he’s dominated the sprint racing contested at Wakefield Park in 2016, and it was no different today.

Ossthuizen took a comfortable Pole Position – his third of the season – from Walden and Jacques Oosthuizen. 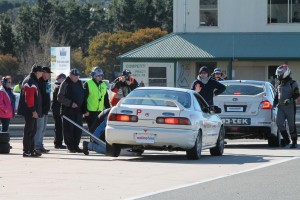 He then went onto win the race by a comfortable 8.2 seconds from brother Jacques, who managed to get by Garth Walden on the very last lap. The race was 10-laps, there was a one-lap Safety Car period on Lap 3, to retrieve the stranded car of Mattias Herberstein

Matthew Holt held off Rodney Thorpe, Steve Hodges and Tony Virag to claim Class A2 honours, and in doing that, he’s held onto his championship lead.

Class B2 honours went to Anthony Soole, as predicted.

Blake Aubin had an interesting day in the cockpit, but still managed to grab Class C victory from his brother Kyle. Kyle led at one point, after Blake ran into some trouble in the tricky conditions, but Blake asserted his dominance by flying down the inside of Kyle at turn 10 – literally forcing his way through – to re-take the lead.

Elsewhere, the Australian Formula Ford series was on-track with the NSW contingent. It’s the final round of the state series and the fourth round of the 2016 National competition. 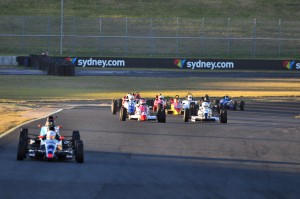 Jayden Ojeda won the opening race from Leanne Tander and Lachlan Gibbons, but the story was further down the order, with Ryan Suhle, Jake Donaldson and Jett Bennett, who are all contesting the NSW decider this weekend.

The deficit between Gibbons and Bennett was reduced to 13 points today after Gibbons took NSW victory and a bonus point for the fastest lap of the race, as well as the pole positon.

Suhle grabbed second ahead of Bennett and Donaldson, but right up until that last lap, it was Donaldson holding third. Had he not slipped up on the last lap, the margin going into the final two races would’ve been just 12.

With conditions expected to be fine, dry and sunny tomorrow, that will suit Bennett better than the conditions today. 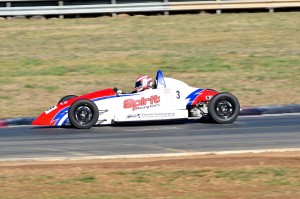 The Kent class is just as much a compelling story as the Duratec series.

Neither Aaron Grech or Simon Hodges took home bonus points today – of the 94 available, they miss out on two key points, and that could be the difference at the end of the series tomorrow.

In the race itself, Aaron Grech had the advantage in the NSW championship battle, but a smart decision from Brennan, to run slicks on a drying track paid off, as he scored his first win of the season from Hobbs and Grech. 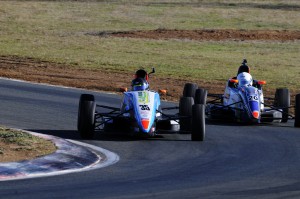 It was a challenging race for all drivers, not least Simon Hodges, who lost two positions on lap four, and never made them back. The damage in the points race was limited on the final lap, when Grech slipped from first to third in class, after a small mistake allowed Brennan and Hobbs to go by.

At one point, Grech was going into the final two races of the season with an eight point lead… now it’s just two, but for the first time in 2016, he has his nose in front, and Simon Hodges has lost the lead he’s held for 15 races. 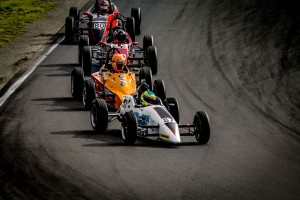 It was Horne’s best finish at Wakefield Park in 2016, where Reynolds has dominated at State level – that was his fourth win on the 2.2km circuit in 2016. 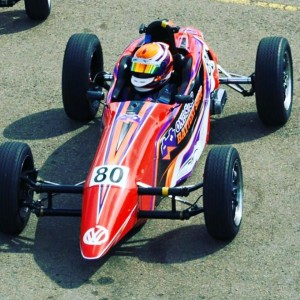 So, tomorrow is championship day in NSW Formula Ford… Gibbons versus Bennett and Hodges versus Grech – we can hardly wait.

Also tomorrow, the 2016 edition of the City of Goulburn Cup – which is Race 2 of 3 in the Formula Race Cars program, and that will be contested over 18 Laps.