Caine Looking to go One Better in Sydney.

After finishing second in class in the MoComm Cup opener at Queensland’s Lakeside Park, Showtell Racing’s Mark Caine will be out to go one better this weekend at Sydney Motorsport Park, when thirty-seven cars line-up for Round 2 of the MoComm Cup, which doubles as Round 4 of the 2017 Shockwave Signs Production Touring Car Championship.

Caine had a near faultless run at Lakeside, until the final lap, when he lost the lead in Class A2, to defending series champion, Matthew Holt, in a set of rather unfortunate circumstances for the Sydney driver.

With the chequered flag falling for Greg Symes, both Caine and Brett Howard (Holt’s co-driver) were marginally ahead of the race winner, leading to confusion as to whether their race had concluded or not.

Both Caine and Howard slowed down and continued around to pit-entry. Some smart thinking from the Holt camp saw Howard  cut across the grass, rejoin the race track, and cross the line in fourth position. By the time Howard chose to go cross country, Caine was already in the pit-lane, forced to slow to walking speed, but was also encouraged to return to the race track and take the chequered flag.

While the result was disappointing, after he went from fourth to fifth in the strangest sequence of events, the pace shown throughout the race will fill him with confidence ahead of Round 4.

Caine took to social media to share his views on Lakeside, saying different sections of the iconic circuit reminded him of historic former NSW venues, Oran and Amaroo Park, as well as the iconic Mount Panorama.

Caine also revealed that he suffered a flat tyre on lap 26 of the race – something that went totally unnoticed by onlookers at Lakeside – which resulted in a longer pit-stop than the compulsory 45 seconds.

He fought hard to get back to fourth, after resuming fifth, until those bizarre scenes in the closing stages saw him go back to fifth.

He goes into Sydney Motorsport Park with a win already to his name this season at the western Sydney venue, and he knows he has the car and speed to match it, and even defeat Holt and Howard in Sydney. 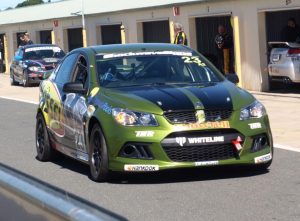 After debuting the Showtell Racing Clubsport at Wakefield Park in April, Caine’s became increasingly comfortable with the car, and the continued development has seen him fast become a serious class contender at every round of the series.

Unofficial practice will take place on Friday, with Qualifying and a sprint race on Saturday, ahead of Sunday’s one-hour feature.

Caine’s entry is just one of thirty-six lining up for Round 4 of the championship, and as he did at Lakeside, he’ll drive solo in his quest for victory in the second endurance race of the season.