Showtell Racing’s Mark Caine will venture to Lakeside Park this weekend, to compete in Round 3 of the 2017 Shockwave Signs Production Touring Car Championship.

Last time out at Sydney Motorsport Park was a mix of highs and lows for Caine. Things didn’t quite go to plan for the Class A2 driver, despite scoring victory in Race 1, as he recorded a retirement in the first race on Sunday, which has put a serious dint in his championship aspirations.

The retirement came after accidental contact with Matthew Holt on the run to turn 2, immediately off a safety car restart, which caused minor damage to his Clubsport. Retirement resulted in Caine scoring no points in that race.

Caine redeemed himself in race 3 – charging through the field to finish seventh outright, and fourth in class.

After six races, Caine sits 12th in the outright state and club championship points, and fifth in Class A2, some 43 points behind the class leader, Rodney Thorpe.

Caine’s attention now moves to the MoComm Cup, which commences this weekend at Lakeside. The round will also count towards the 2017 Club Championship, but not the State Championship – that goes on hold until the next round at Sydney Motorsport Park.

The MoComm Cup feature races are one hour in length, and will feature at the next two NSW rounds in Sydney and Goulburn as well.

For this round at least, Caine will drive solo… and in the recent past, he’s has had tremendous success in the longer races, after teaming up with Jimmy Vernon in the Shockwave Signs Motorsport Toyota 86 for 2nd in Class at the Hi-Tec Oils Bathurst 6 Hour, and 5th outright, plus the Class D win, in the final round of the 2016 Australian Production Cars Series, at Sydney Motorsport Park. 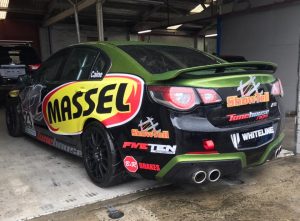 Caine is one of several New South Welshmen making the trek to Lakeside, for this historic combined event for the Shockwave Signs Championship, and the new Bilstein Suspension QLD Championship.

In the build up to the event, Caine said the focus for this round wasn’t so much on championship points, as it was the experience of driving a new circuit.

Caine used Friday practice to learn the 2.41km circuit, and fine tune his car setup, again with assistance from TLA Racing.
It will be a busy weekend for that stable, with Trevor Mirabito co-driving a BMW 130i with Brent Edwards. 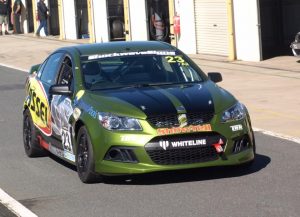 After practice, Caine was seriously impressed by the circuit and his experience. Lapping in the 59-second bracket, Caine commented that as he was getting over the excitement of passing through certain parts of the circuit on one lap, he was already back to the point, because the circuit is so short, but so fast.

The eight turn, 2.41km circuit plays host to Round 3 of the Shockwave Signs NSW Production Touring Car Championship this weekend, with Qualifying and two sprint races on Saturday, and the feature one-hour race on Sunday.