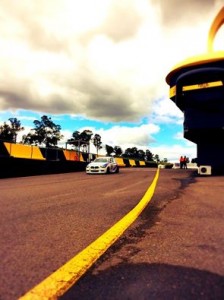 While the main race in Round 5 of the Championship is tomorrow, there were still points on the line in the opening day of action at Sydney Motorsport Park, in the penultimate round of the 2015 Shaw Vineyards New South Wales Production Touring Car Championship.

Today, the strong 31-car field filed out for Qualifying and two short, sharp sprint races.
With this being an enduro round, one Qualifying Session and Race was contested by the nominated first driver, while the Driver B Qualifying session and sprint race was for entries fielding a co-driver.

Driver A Qualifying
Turns out, it was a championship changing day, with Dylan Thomas, the man who had dominated proceedings to this point in 2015, only finishing 24th in the Driver A race.

He was third in Qualifying behind Luke Searle and Daniel Oosthuizen respectively. Searle was also competitive in Qualifying at the last round of the series in Goulburn, but lost out in the Shootout, as a drying track paved the way for the 4WD Evo entries of Thomas, plus Daniel and Jack Oosthuizen to dominate. 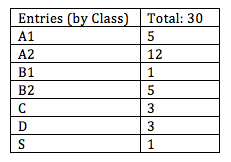 Gus Robbins was 4th in another Class A1 entry, while Steve Hodges rounded out the top five, as the first of the Class A2 cars.

Anthony Soole was the first of the B2 entires, and qualified 6th outright, while Paul Loiacono was the fastest B1 entry in 12th position.

Elsewhere, Simon O’Donnell and Chris Reeves finished 22nd and 23rd outright, and were fastest in Class C and D respectively, while Jonathan Fishburn, the sole Class S entry, was 29th.

The big surprise in Qualifying was Jacques Oosthuizen – the man who was third on the grid for the last race at Wakefield Park, was 17th in Qualifying, which left him with a lot to do in the Qualifying race after lunch. 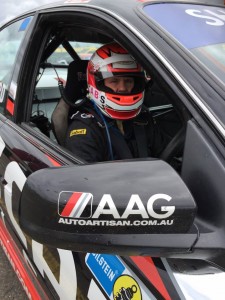 Driver B Qualifying.
Driver B qualifying produced some interesting results, with the Liqui-Moly entry of Steve Hodges qualifying fastest, from Michael Caine and Tony Virag, who were subsequently 1st, 2nd and 3rd in Class A2.

Luke Searle’s co-driver Barry Graham was 4th outright and 1st in Class A1.

Joshua Muggleton, who will co-drive with Mark Caine tomorrow, was the fastest Class B2 entry in 7th outright.

Peter Lown, the co-driver of the #11 entry with Paul Loiacono, was 18th, and the sole B1 entry on-circuit in Driver B Qualifying.

19th outright was Chris Reeves, who was the fastest Class D entry, again. Class C was topped by the Renault Megane of Kyle Aubin, who was 21st outright, and is, of course, sharing that entry with Blake Aubin in the one-hour tomorrow, and top spot in Class S was taken by James Herington, in 25th outright.

Driver A Race | 11 Laps (43.23km)
The Driver A sprint race was won by the pole-sitter, Luke Searle, and it was a comfortable win. The BMW135i won by a whopping 14.2 seconds from Daniel Oosthuizen, who inherited the Class A lead in the State Championship as a result of Thomas’ 24th place finish that I mentioned earlier.

Steve Hodges took the final spot on the podium, and first place in Class A2, from Tony Virag and Trevor Symonds, who were 2nd and 3rd in A2, and made up the final two spots in the outright top five.

Four different classes were represented in the top ten, as Paul Loiacono and Mark Caine finished sixth and seventh, taking the maximum points on offer in Classes B1 and B2 respectively!

Elsewhere, Jacques Oosthuizen had a good run, making up seven positions after a disappointing qualifying, to finish 10th outright, and Robert Coulthard followed him through to finish in 11th.
Other class winners were Chris Reeves in Class D, who finished 16th outright, Blake Aubin in Class C (17th) and Jonathan Fishburn in Class S (23rd). 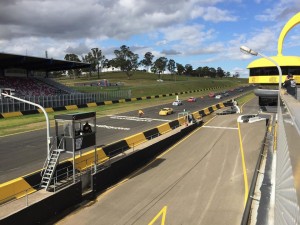 Sunny conditions greeted the drivers for the last race of the day. In a smaller field, by virtue of the fact that not all cars are running two drivers, it was Tony Virag beating home Jamie McKinlay and Barry Graham. Nigel Williams was fourth, with Josh Muggleton rounding out the top five.

In that top five alone, you had three different classes represented, with Virag winning A2, Graham taking A1 honours, and Muggleton securing B2.

Peter Lown was again too good in B1, finishing first in class and 11th outright.

Chris Reeves finished a consistent and dominant day in Class D, by winning the class race, and finishing 14th outright. 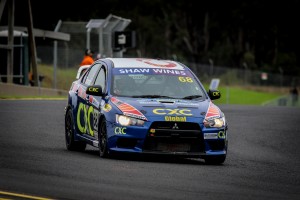 17th outright was the Renault Migane of Kyle Aubin, who was again the best in Class C, while the Class S entry driven by James Herington was an unfortunate retirement.

So, Dylan Thomas has lost the championship lead. Steve Hodges, Chris Reeves and Daniel Oosthuizen are all beneficiaries of that, but thankfully Thomas had a much better outing in the opening Formula Vee race, where he finished in fifth place, in a race won by the birthday boy, Ryan Reynolds.

We’re in for one hell of an enduro tomorrow, as we’ll determine the enduro champion, the winner of the 2015 McComm Cup, with the final 60-minute race of the season.

If you’re intending on travelling trackside, admission is $15 for Adults, but Children under 12 are FREE, and the final race of the fifth round of the Shaw Vineyards NSW Production Touring Car Championship will kick-off the afternoon session shortly after midday.