Non-Championship round at Sydney Motorsport Park to bring the curtain down on Showtell Racing’s debut season. 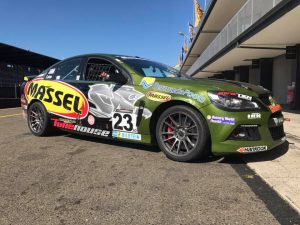 Mark Caine will return to the scene of his last outright win in Production Touring Cars this weekend, when he contests the final event of the 2017 season – a rare non-championship round supporting the Muscle Car Masters at Sydney Motorsport Park.

It was at the Western Sydney venue, where Caine secured an outright race victory, during round 2 of the series back in April, and since then, he’s gone on to win the season of endurance – taking out the MoComm Cup – and also the Class A2 Club Championship, in what has been a very successful year for the Sydney driver.

While this weekend isn’t for championship points, it’s a hugely important outing for Caine and everyone else in the NSW Production Touring Car Championship field, as they’re on the support bill for one of the best attended events on the Sydney Motorsport Park calendar, and with that comes a tremendous opportunity for competitors to showcase themselves, and their category, to a new audience, and within that, potential new sponsors for the 2018 season, and beyond. 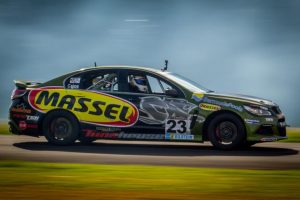 Caine has received tremendous support from his loyal sponsors throughout 2017, and will be looking for a strong result in Sydney, to give them the best exposure possible, as this event will be streamed live all weekend.

As far as the racing is concerned, Caine will face off against his usual rivals one last time, including Matthew Holt, and Trevor Symonds, plus Tony Virag who returns for a one-off appearance in the class, in his 2016 championship car, after spending 2017 driving with Krincorp Racing’s Joe Krinelos in the MoComm Cup Races. 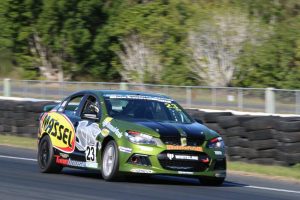 Caine’s final hit-out of the season was originally scheduled to be at Queensland Raceway, as part of the final round of the Bilstein Suspension QLD Production Touring Car Championship, but business commitments prevented the Showtell Racing driver from trekking north with his HSV Clubsport R8. Instead, he’ll line up in Sydney, after the non-championship event was rushed into the schedule, as the ARDC looked to fill out their Muscle Car Masters program.

Last month, Sydney Motorsport Park played host to the last round of the championship proper, where three sprint races were contested, with Caine finishing seventh in race one, before moving his way up to fourth by the end of race two, and maintaining that position in race three, and he’ll be looking to continue that strong form this weekend. 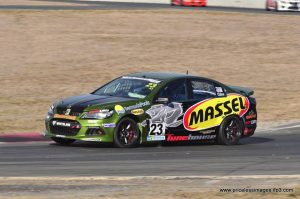 From a Class standpoint, he was fourth in Race 1, before finishing 2nd to Matthew Holt in the two Sunday races. Unfortunately, that wasn’t enough to snatch the outright Club Championship off Adam Gosling, but as detailed earlier, he did secure first place in Class A2.

Caine will contest three 10-lap sprint races this weekend, with the first being held on Saturday afternoon after Qualifying.
At the conclusion of this event, Caine’s off-season will commence, as will preparations for his 2018 campaign.