The V8 Superlaps NSW Production Touring Car Championship is set to remain at seven events, with confirmation today that Queensland Raceway has been added to the 2017 schedule.

The Queensland Raceway event was already schedule as part of the 2017 Bilstein Suspension Queensland Production Touring Car Championship, but will now count towards both series’, with champions to be crowned on Sunday, October 29.

The event sees the NSW series expand from six to seven events for 2017, stretching from April to October.

The season will therefore have as many rounds as 2016, in less time, following a February start and December finish for season 2016.

Seven rounds, across four circuits, in two different states will make up the season, with less sprint races and more enduros than we saw in 2016.

The addition of Queensland Raceway takes the MoComm Cup from three to five races in 2017, one more than 2016. 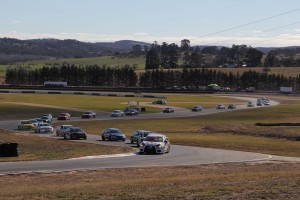 The Queensland Raceway event will be very similar to what we saw at Winton Motor Raceway just over a week ago, with the first one-hour race to be contested under the lights on Saturday night, and a second to be run on the Sunday.

Lakeside International Raceway will host the opening round of three in the Queensland Championship on Saturday April 1, and that will be the sole stand-alone event for the inaugural Queensland series, which consists of four one-hour races across three events.

The NSW Series will commence on the same weekend, with a sprint ruond at Wakefield Park in Goulburn.