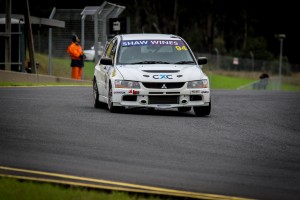 He may not be leading the Championship, but he isn’t far off.

Daniel Oosthuizen has picked up two trophy race wins so far in 2015, and sits just 9 points off the lead in the Shaw Vineyards NSW Production Touring Car Championship, with just two rounds to go.

Standing in his way, CXC Racing team-mate Dylan Thomas. The two men have been battling closely at the front of the field all season, not just for race wins, but also for outright and class bragging rights.

It’s Oosthuizen’s second season in the series, and already he’s made his presence known. After missing the outing at Bathurst in April, the youngster smoked the competition in the race that counted at Sydney Motorsport Park in May, in a round that saw three races, and three different winners, including Thomas, who’s the man standing in the way of Oosthuizen and the Class A1 title in 2015.

At Wakefield Park in June, Oosthuizen was a close second to Thomas in the opening two races, before getting the jump in the start of the final race, taking the lead, and then holding off Thomas after a Safety Car interval, to make it two trophy race wins on the trot! 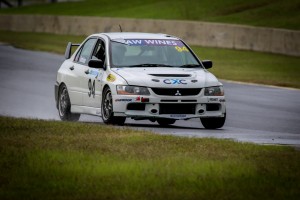 Oosthuizen is an excellent starter, and that was evident again at Wakefield Park in August. Oosthuizen bolted off the line, and took the lead off Dylan Thomas, who had pole position, and held the lead for 20 laps, until a combination of pressure from Thomas, lapped-traffic and a brake issue brought about his undoing at turn 2. He went off the circuit, through the gravel trap, came out the other side, and was able to resume, but his race lead was gone, and so was Dylan Thomas.

From that point, Oosthuizen was left to consolidate second place for the remainder of the event, but had to do so whilst nursing some uncooperative brakes.

Speaking of brake issues, Daniel’s brother and father had the same issues in their CXC Global Racing Evo, but unfortunately they weren’t able to get to the chequered flag.

In the previous round, they managed to Qualify third, and Jacques first stint was strong, but then Rolouf took over, and at about that time, the brakes started to go on the #16… As a result, Rolouf’s times dropped off, and eventually, he had no choice but to park the Evo, as the brakes were completely wrecked. 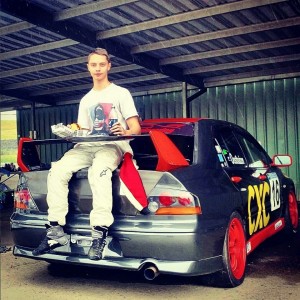 The Oosthuizen’s had a strong career in karting before coming to Production Touring, with both and Jacques enjoying many wins at major race meetings, and like karting, it hasn’t taken them long to find their feet, and be a competitive force at the pointy end of the field!

Practice was held for this round of the Championship at Sydney Motorsport Park yesterday, with weather again playing its part this weekend, just as it did when the series visited the Western Sydney circuit in May.

Sydney has been experiencing a damp-period of late, with rainy condition being present for the last nine days in succession. Sadly, there’s no end to that in sight, with showers expected on BOTH days this weekend.

Regardless, the 31-strong car field is set to be unleashed for Driver A (9:40am local time) and B (11:20am local time) Qualifying this morning, before a sprint race for both drivers this afternoon, ahead of the final one-hour race of the year just after lunch tomorrow.