Just when you thought the upcoming round of the Queensland Production Car Championship couldn’t possibly get any bigger, it’s now set to have an international flavour as well.

American star Matt Powers is the latest notable name to join the growing field, for this weekend’s meeting at Queensland Raceway.

Powers – best known as the winner of the 2018 Aussie Driver Search contest – is set to compete in the fourth round of the championship – the endurance portion of this upcoming double-header weekend – alongside Anthony Levitt, in the Class C Renault Clio.

Powers rose to fame last year, when he was crowned champion of the Aussie Driver Search ‘Pro Class’ competition. Victory there saw him awarded a drive, with Matt Stone Racing, in the 2019 Dunlop Super2 Series.

In February, it was decided that Powers would instead contest the Super3 series, with ADS management insisting the move was in order to more steadily ease their contest winners into Supercars competition.

Powers was left ‘gutted’ in May, when the Aussie Driver Search program was placed into liquidation – ending his Super3 campaign after only one round (Phillip Island), but the setback only left the American more determined to press on with his Motor Racing career.

Four months on – after a stint back in the United States, where his Fiancée is based, in California – he’s back in Australia, and fresh off a drive in Jason Bright’s TCR Australia Volkswagen, at Winton, he’s heading to the Sunshine State for a challenge of a different kind, as he continues to pursue him dream, of one day driving a Supercar.

Powers and Levitt became acquainted through the final of the ADS campaign, and have remained in contact since, with the latter delighted to have the American join forces with him this weekend at QR.

Powers himself is wrapped, to have been asked, to co-drive with Levitt this weekend.

We caught up with the youngster, to get an update on what he’s been up to since April, and also get his thoughts on the upcoming weekend of racing.

Q: Since competing in Round 1 of this year’s Super 3 Series, what’s been happening in the world of Matt Powers?
Powers: “It’s been a heck of a ride! I ended up heading back to the US for a few months, to figure out the best way to focus on how to get back into a Supercar. I know it’s going to be a long road, but I’m excited to forget about all that, and have some fun on the weekend.”

Q: What brings you back to Australia?
Powers: “It has been a dream of mine to race in Supercars for a very long time, and to know how close I came to getting that journey started, I knew I couldn’t give up, and needed to come back.”

Q:  How did the deal to co-drive with Anthony Levitt come about?
Powers: “I got to know Tony at the ADS final and we’ve stayed in touch since then. He’s really a top-notch dude, and I’m glad to call him a friend. He’s built this Renault pretty much by himself, with such amazing attention to detail, so when he asked if I wanted to jump in, I certainly wasn’t going to say no.”

Q: Are you looking forward to the event, and what are you hoping to achieve?
Powers: “Definitely looking forward to the weekend. Going to be a lot of good laughs, and hopefully some great racing! After driving a TCR car at Winton, this will be my second time in a FWD car on track, so I’m super excited for the challenge. Anytime you can get in a race car is a good time!”

After two of the six scheduled championship rounds, Anthony Levitt sits fifteenth in the outright championship standings, and second within his class – trailing Karlie Buccini by 42 points.
This weekend is the only time the Queensland Production Car Championship will race for championship points at Queensland Raceway this year. The opening two rounds were staged at Morgan Park, with the Warwick venue also set to host the final two rounds of the campaign.

Levitt is a relative newcomer to the Queensland Production Car Championship, which itself is only in its third year.
The 2014 Renault Clio RS is the only one competing in any Production Car series in Australia, and was the first of its kind to be CAMS homologated.

Levitt will contest Round 3 of the MoComm Sprint Cup on Saturday morning, before joining forces with Powers for the balance of the weekend.
The Renault pilot is using this QPC powerplay weekend at QR, to build towards a crack at that famous mountain in Bathurst.

“The focus is on continuing the development of the Clio, until we are class leading. We know it’s possible, with the goal being the 2020 Bathurst 6 Hour. Plans are well underway to be on the grid in 2020 – each round we find something new to redevelop, in order to either gain power or save weight.
Special thanks must go to (fellow QPC competitor) Justin Anthony, for all of his guidance during the build of the Clio.”

Race 1 will be contested under lights on Saturday night, before Levitt and Powers each contest a sprint race, on the Clubman Circuit, on Sunday morning, before the second one-hour race takes place at approximately 1pm on Sunday afternoon. 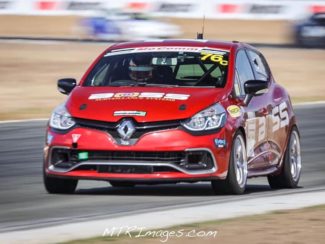