After a ten-week break, the Racer Industries Queensland Touring Car Championship resumes this weekend, as the series headlines the annual ‘2 Days of Thunder’ meeting at Queensland Raceway.

The third round of season 2019 will be a record breaking occasion for the category, with no less than FORTY-FIVE cars entered for the four-race program.
However, it will also be a rather sombre occasion for the teams and drivers, as this will be the first time they’ve gone racing since the passing of QTCC Chief Scrutineer, Trevor Lobegeiger, nearly six weeks ago.

Following the opening two rounds, held at Queensland Raceway and Morgan Park respectively, competitors dropped their worst round, which means it’s still too early to establish who the championship favourites are in 2019. That said, with only fifteen races left in the season, every race is now crucial to anyone wishing to mount a championship assault.

There have been three different race winners in Class A1 so far in 2019 – Brett Kennedy holds a marginal, after winning the second round of the season at Morgan Park, ahead of Steve Hay, who is just seven points away, after he won the opening round of the season at QR, while Chris Sharples sits a further five points back.

Matthew Haak has won both rounds of the A2 championship thus far, but his clean-sweep at Queensland Raceway sees him holding a 72-point lead, over the chasing pack, coming into this weekend.
Michael Woodcroft and Rob Droder sit equal second, just three points clear of Bayley Hall, who won the opening three races in the most recent round, at Morgan Park.
Series newcomer, Mitchell Wooller is fifth in the standings, after a stunning debut in Warwick, but how the BMW fairs against the Holden brigade on the long straights of Queensland Raceway remains to be seen.

In Class B, Chris Holdt holds a 44-point advantage, over Mark Giorgio and Les Hanifin, after claiming round honours at Morgan Park. Les Hanifin is the only one, of those three, to have competed in both rounds thus far, but he wasn’t able to improve on his Round 1 points haul out at Morgan Park, and remained on 240 points as a result.

After missing the opening two rounds of the season, Jason Lansdell returns to the field this weekend, which will boost the numbers in the A1 field. This weekend will see the category return to racing on the 3.12km National Circuit at Queensland Raceway, after the opening round was split across the ‘Clubman’ and ‘Sprint’ circuit.
The Willowbank venue was originally due to host only two rounds of the 2019 Racer Industries Queensland Touring Car Championship, but with the future of Lakeside Park looking grim, it’s likely that the remainder of the season will be contested at QR, however only this weekend and November’s season finale will be contested on the National Circuit.

As per usual, at a two-day event, Qualifying will commence the on-track schedule on Saturday morning, ahead of two races on Saturday afternoon, and another two on Sunday.
All four races will be twelve laps (37.44km), with on-track activity commencing at 8:30am each morning.
Across the weekend, there’ll also be an on-track tribute, from the QTCC family, to Trevor Lobegeiger. 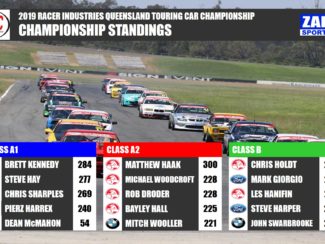