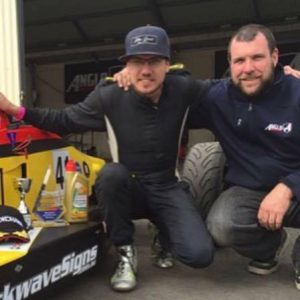 In 2016, Holihan took part in no less than FIVE Formula Ford Championships with Anglo Australian Motorsport, making for a very long season of racing.

He managed to finish inside the top three in four of them.

There was some speculation that Holihan had decided to hang up the helmet for good, in order to focus on his new business venture, Traxstar Race Wear,  but he hasn’t gone away completely – still competing under the Anglo Australian Motorsport in the historic formula ford  championship, in conjunction with (Daniel’s Step Father) Geoff Morgan’s historic racing team, MOGSPORT.

Holihan says he’s interested in a return to State racing, although it isn’t high on his radar right now, as his attention in the immediate future is his new business, but, as always, he’s left his options wide open, and upon his return, he may be seen racing in categories such as the newly formed Mazda RX8 Cup, the ever popular Production Touring Cars, Production Sports (for GT cars), where he could co-drive with his step-father, Geoff Morgan, or maybe even a return to Formula Ford.

For now, the focus is Traxstar Race Wear, which you can check out on Facebook.