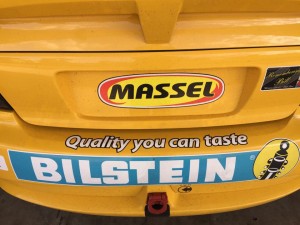 After teaming up with Gerry Murphy for the endurance portion of the 2015 Shaw Vineyards NSW Production Touring Car Championship, Michael Caine headed for a different set of wheels on the second weekend of October.

Like most drivers in Australian Motorsport, Caine isn’t one to pass up the opportunity to race at the famous Mount Panorama Circuit in Bathurst.

Michael Caine was given the opportunity to run alongside Aaron McGill in the 250km Dunlop Series Race. It was round 6 of their 7-round Championship, and despite it being a very different car, it was a terrific opportunity for Caine to get in some miles, at speed, on the famous 6.213km layout, before he again teams up with Gerry Murphy for the Hi-Tec Oils Bathurst 6 Hour in March.

McGill and Caine managed to finish 17th in a very competitive field on Super Saturday, in a race that was over before the skies opened on Mount Panorama.

Caine said after the event that the result was better than he had ever expected.

There were double celebrations in the Battery World Garage on Saturday Night, after McGill successfully asked for his girlfriends hand in marriage, LIVE ON TV I might add, before the Dunlop Series race got underway!

Caine will not drive in the final round of the 2015 Shaw Vineyards NSW Production Touring Car Championship. It’s a sprint round, and therefore Gerry Murphy will take on driving responsibilities for the #35 entry for the three races, in a field of 30 cars on the 3.93km Gardner Circuit at Sydney Motorsport Park.

Caine has said that, while he enjoys racing in the endurance portion of the championship, he’d like to compete in the sprint races again somewhere down the track.

Murphy currently sits 12th in both the State and Club Championships, and 6th in Class A2 coming into the last round of season 2015.

Qualifying will take place on Saturday morning, before Race 1 in the afternoon, and the final two races of the season on Sunday.